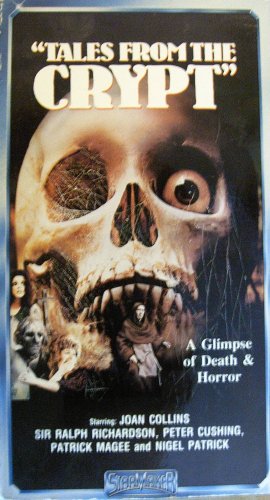 Well-after the Comics Code had spelled the end of the Tales from the Crypt comic books, but decades before HBO would revive the series via anthology horror television, there was this 1972 film inspired by various EC horror comics. Adapting stories from Tales from the Crypt, the Vault of Horror and the Haunt of Fear, this film effectively pays homage to those ground-breaking and controversial comics from back in the day.

Five strangers wander into a dank and labyrinthine crypt and quickly lose their way. After becoming trapped, they are greeted by the eerie Crypt Keeper (Sir Ralph Richardson). The Crypt Keeper forces each of them to remember the gruesome story of the last thing they did before entering the crypt…

In “All Through the House”, a greedy housewife (Joan Collins) murders her husband on Christmas Eve in order to collect his insurance. However, her murder plan is complicated by the arrival of a homicidal maniac garbed in a Santa Claus outfit who is determined to get inside the house.

You probably remember this one best from the adaptation used in the HBO Tales from the Crypt television series. Indeed, I actually liked that version of the classic story a bit better, mostly since the killer Santa was a bit creepier-looking. This version isn’t bad, it’s just not the best version of the tale out there.

In “Reflection of Death”, a man heartlessly leaves his wife and two children to run away with a younger woman whom he has fallen in love with. Shortly after they hit the highway, the pair are run off the road and injured in a car accident. The man stumbles from the wreckage and tries to return home, but everywhere he goes people run away in terror at the mere sight of him.

A very short one, but a great story none-the-less. Following the accident, all the events are seen through the point of view of the man. Sure, you can most likely guess why everyone is terrified of him, but the pay-off at the end is still a classic.

In “Poetic Justice”, a young entrepreneur has a bitter grudge against a kind old man (Peter Cushing) who lives across the street from him. He believes the old man’s home depreciates the property value of his real estate. The young man then gradually uses his influence to ruin the kind old man’s life, eventually driving him to suicide after he reads a slew of nasty Valentine’s Day cards the young man sends him (and signs with the names of all the people in the neighborhood). However, following his death, the kind old man may not be so kind after all.

A somewhat heart-wrenching story, as you watch that poor old man’s life get so miserable. Peter Cushing does a great job as the old timer and makes it one of the better installments in the film. Also one of the gorier stories, with plenty of blood and decaying corpses by the finale.

In “Wish you were here”, a sneaky business tycoon is facing bankruptcy after several questionable business practices. While fretting over what to do, he and his wife come across a statue which grants three wishes. The wife immediately wishes for more money, which she gets, but only after her husband is killed in a car accident. The wife then desperately tries to use her remaining wishes to bring her husband back, but the result isn’t quite what she had in mind.

A variation on the old “Monkey’s Paw” tale and probably my least favorite story of the bunch. Still, it has its up-sides. You get to see Death riding a motorcycle (and wearing a helmet for some reason; it’s DEATH, what’s he afraid of?) and the pay-off after the wife screws up the wishes is pretty gruesome. Still, the pay-off itself, logically, doesn’t make sense under the context of the wrap-around story (you’ll figure it out if you see the movie).

In the last tale, “Blind Alley”, a miserly old army Major becomes the new superintendent of a home for the blind. He quickly begins to misappropriate the budget, cutting funds for things like heating, blankets and food in order to buy luxuries for himself. The blind people protest but are kept at bay by the Major’s fearsome German shepherd. Eventually, one of the blind men falls ill due to the cold and passes away. Fed up with their superintendent, the blind men imprison the Major and eventually force him into a booby-trapped maze. What lies at the end of the maze is rather unpleasant.

I remember seeing this adapted for the HBO TV series and feeling a bit disappointed. I certainly like this version of the tale much better. Sure, it doesn’t make *perfect* sense, I mean, how could those blind mean possibly build an intricate maze that technically sound? But you’re not really supposed to think about it, you’re just supposed to sit back and watch the Major receive his just desserts. And, in all honesty, it’s pretty satisfying.

Overall? I like Tales from the Crypt. Made long before the television series became the more well-known aspect of the franchise, this film is much truer in many ways to the source material. Sir Ralph Richardson’s rendition of the Crypt Keeper isn’t the pun-spewing cackling corpse people today are familiar with. Like in the EC comics, he’s a ragged, ugly man in a dirty robe. Perhaps not as memorable as the version from the TV series, but charming in its own way. The film was later met with a sequel, appropriately titled “the Vault of Horror” after another line of classic EC horror comics. I’d recommend tracking down that one as well, as both films are excellent.

Tales from the Crypt isn’t terribly gory, but wonderfully atmospheric and terrifically acted. Any fan of the television series should make an attempt to get their hands on this film as the stories are just as good as anything the series ever produced and it’s nice to have alternate tellings of various episodes.