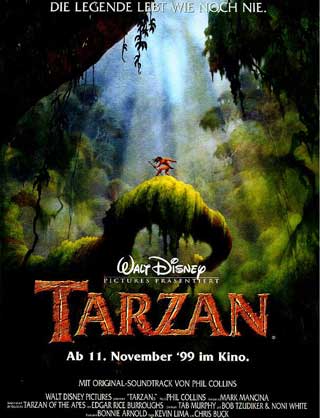 I’m not exactly sure why I waited 7 years to watch this movie. I was a bit disenfranchised with Disney, as they had been releasing so many terrible movies with such consistency that they eventually had to shut down their in-house animation department. However, during the decline of Disney animation, a few gems managed to squeak by. Lilo & Stitch is one of them, Tarzan is the other.

We should all know the story of Edgar Rice Burrough’s Tarzan: the Ape-Man. A young human baby is orphaned in the darkest jungles of Africa. He is found by Kala (Glen Close), an ape who had recently lost her own son. Kala takes the baby in, naming him Tarzan, and he is raised amongst the gorillas as if he were one of them. Kerchak (Lance Henrickson), the silverback alpha male of the gorilla tribe, is hesitant about taking the human in and Tarzan (Tony Goldwyn) fights an uphill battle to win his approval. Living in the jungle with his friends, Terk (Rosie O’Donnell), the tomboyish gorilla, and Tantor (Wayne Knight), the neurotic and cowardly elephant, Tarzan becomes a master of vine-swinging and tree-sliding. Now an adult, Tarzan is startled by the sudden intrusion of a research team from England. Among them are the beautiful Jane (Minnie Driver), the jolly Professor Archimedes (Nigel Hawthorne) and the villainous hunter, Clayton (Brian Blessed). Tarzan is immediately smitten with Jane and makes peace with the humans. However, Clayton intends to use Tarzan’s naiveté to locate the capture the local gorillas.

Tarzan is a different kind of Disney movie than what a lot of people are used to. It’s much more action-oriented and a bit more violent. It’s more in-tune with the Black Cauldron as far as intensity goes (though not as demonic). There have been plenty of Tarzan movies over the decades, but I have to say, the character lends himself to animation a fair bit better than in live action. The animators at Disney imbue Tarzan with all the mannerisms and quirks of a gorilla, making him genuinely feel like an ape-man. From having double-jointed fingers to just the way he moves and inspects things, he’s brought to life remarkably well. His voice actor, Tony Goldwyn, is pretty good. Tarzan’s speaking voice isn’t really anything to write home about, but I would like to compliment him on his outstanding impression of the iconic Tarzan roar. Johnny Weissmuller would be proud.

What sticks in most people’s memory about this film, and honestly, the coolest part, is the “vine-surfing”. In older movies, Tarzan just swung from tree to tree on conveniently placed, load-bearing vines. Not anymore. Tarzan leaps and hurls himself from treetop to treetop, racing down coiling moss-encrusted vines, doing loop-de-loops and back-flips galore. The entire sequence where Tarzan rescues Jane from a horde of blood-thirsty baboons is a trip.

Disney, being Disney, also throw in a slew of light-hearted characters and sequences. Tarzan’s comedy-relief sidekicks are…tolerable. I’m not a fan of Rosie O’Donnell, but if anyone is more qualified to play a gorilla, I’ve yet to see them. Wayne Knight does a fun Tantor, though I almost wish they’d gone with a Woody Allen impression to compliment the neurotic character. The pair aren’t the best, and often try to steal the show, but they certainly aren’t the worst comedy-relief sidekicks in a Disney movie. The gargoyles from the Hunchback of Notre Dame or those damn animals from Pocahontas come to mind.

Then there’s the music. Phil Collins won an Academy Award for his music in this film, narrowly beating out “Blame Canada” from South Park: Bigger, Longer and Uncut. I still think that verdict was bullshit, but that’s a separate matter. I typically don’t like Phil Collins, but I can’t argue that his songs are very well-placed in this film and help accentuate the emotional moments. There are quite a few montages in Tarzan and that’s usually when they belt out a Phil Collins tune. The one non-Collins song, the scene where the gorillas make music Stomp-style with the camp equipment, is virtually unwatchable, however.

Tarzan is one of the better accomplishments from Disney during their decline and a really fun adaptation of the source material. It shares a number of similarities with the Jungle Book, though I find this one to be better.