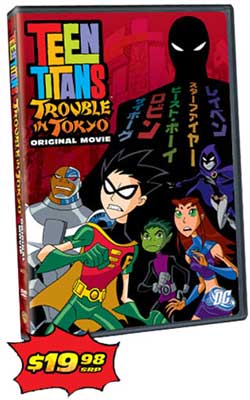 With the Teen Titans animated series now cancelled after a 5 season-long run, Teen Titans: Trouble in Tokyo is meant as a last hoorah for the cast of characters. In some ways, yes, it achieves its goal, as you get to see the Titans fighting crime one last time, and anything is better than nothing, I suppose. But, at the same time, it falls short of everything it *could* have been, being a stand alone one-shot story rather than tie-up the numerous loose ends left after the end of season 5. You can’t help but feel a little let down, that even with this extra movie, all those nagging plot threads remain untouched.

Titans Tower is attacked by a mysterious ninja named Psycho-Tech. The Teen Titans (Robin, Starfire, Raven, Cyborg and Beast Boy) apprehend and interrogate the ninja, but only manage to get a name and a location from him before he escapes: Brushogun and Tokyo. Intrigued, the Titans head to Tokyo to investigate. There, they meet up with Commander Daikyo, the head of the Tokyo special police force, a legion of highly-trained quasi-futuristic soldiers who have reduced crime in Tokyo by 200%. The Titans feel like a third wheel at first, as Commander Daikyo’s forces outshine them, and decide to spend their time in Tokyo as a little vacation. Robin, however, continues his detective work which leads to a rematch with Psycho-Tech. The rematch is bittersweet, as Robin unintentionally kills Psycho-Tech and the Teen Titans become wanted criminals all over Tokyo.

As I mentioned, all the plot threads from the last season are completely ignored, such as Slade’s schemes or Terra’s amnesia. This is a completely self-contained adventure requiring little knowledge of the television series other than who the characters are and what powers they have. So if you were expecting any significant story development or closure, you won’t be finding it here. The only plot thread they approach, I suppose, is the relationship between Robin and Starfire. Though, truthfully, they’d already taken care of that in the last season. This was just annoying and redundant.

They manage to cram in every single Japanese stereotype and anime cliché known to man in an hour and a half. There’s catgirls, giant robots, karaoke, sushi bars, Dance-Dance Revolution, Guitar Hero, homages to Lupin III, Astro Boy, and Akira…the works. It’s cute at first, but soon you realize that the whole *point* of the movie was to cram in stupid anime references to satiate slobbering otaku Asian-wannabes. It goes downhill from there. Teen Titans has always been about pumping the septic tank of hackneyed anime conventions, but this was just overkill. As a person who knows Japanese, it was also irritating to read the stupid “Easter Eggs” all over the Tokyo buildings and billboards (characters names as well as utter gibberish were smattered all over the place in katakana). There were also a few spelling and grammatical errors in a few important places that could’ve been avoided with a little more research. True, this won’t bother anybody who can’t speak or read Japanese, but it shows a sign of laziness on the part of the creative staff.

Thankfully, there is no Pufi Ami Yumi music through any of the movie, which was something I was truly dreading (they represent the worst kind of J-Pop Japan has to offer). There is one bit where Beast Boy sings the Teen Titans theme song karaoke-style (he actually sings the translated lyrics of the Japanese version, rather than the standard US theme), but I thought that was kind of neat.

The animation on the part of Dong Woo is as fluid and stylish as ever. While I hate the annoying anime reactions and tired old sight gags (characters turning into midgets with giant heads and running around in circles yelling at each other), the animation-itself was very good. The fight scenes maintain their typical high-standards and the battle choreography is excellent. The fight with Psycho-Tech at the beginning, as well as the final battle against the gigantic Brushogun monster, are the film’s highlights animation-wise.

I wouldn’t call Trouble in Tokyo a “waste of time” but I would say it was a bit of a let-down, not to mention somewhat creatively bankrupt, relying on so many stupid anime references and Japanese stereotypes. Still, the animation was quite good and the villain was rather unique. It’s worthy of a C. It’s about the same kind of experience as “Batman: Mystery of the Batwoman”; entertaining but totally unnecessary.