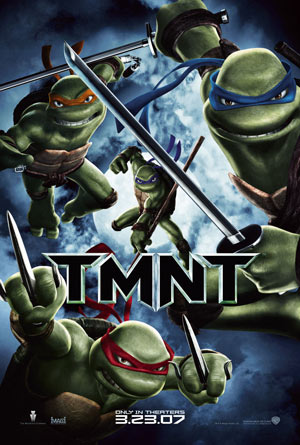 My childhood can be summed up with three simple ingredients: “Ghostbusters”, “X-Men” and “Ninja Turtles”. I love me some Turtles. Now, contrary to what a lot of people might have you think, the TMNT hardly ever went away. They’ve almost always existed in some form or another since their debut. I mean, a year after the original cartoon was cancelled, that live action TV show came around. Four years after that went bust, the current Ninja Turtles cartoon began airing on Fox. The comics hardly ever went away, though publishing would sometimes jump around between Mirage, Image and Archie. So really, what have people been missing about the TMNT? What aspect of the franchise has been sorely absent for so many years?

A theatrical movie, of course. It’s been fourteen years since their last effort and the TMNT haven’t seen the silver screen since. This new film almost seemed to come from nowhere, mostly due to a very late marketing campaign that didn’t seem to get going until a few weeks before the flick’s premiere. Not a very good strategy, I must confess.

It’s been several years since the Teenage Mutant Ninja Turtles defeated their arch enemy, the Shredder. Over time, the four brothers have grown apart. Leonardo (James Arnold Taylor) has left to Central America for over a year to train, Donatello (Mitchell Whitfield) has gotten a job as a tech support consultant, Michelangelo (Mikey Kelly) is living it up as a children’s birthday party chew toy and Raphael (Nolan North) has taken up the guise of a vigilante known as the Nightwatcher. The four brothers are quickly drawn back together when immortal corporate executive Max Winters (Patrick Stewart) hires the ruthless Foot Clan to help him gather a horde of grotesque monsters. Winters intends to awaken his four stone generals and use the monsters to open a gateway to another dimension. If the Ninja Turtles wish to stop him, they’re going to have to learn to work as a team once again.

As a Ninja Turtle fan, I really enjoyed the flick. It had all the plot of a Saturday Morning Cartoon, so don’t go into this expecting all sorts of complex storytelling. Honestly, had the script been shopped to 4Kids Entertainment and not the Weinstein Company, this probably could’ve ended up as an episode of the cartoon series and nobody would’ve noticed. Yet it’s rated PG and it’s a kid’s movie, so really, what else did you expect? As far as being a kid’s movie is concerned, don’t worry, this is far darker and more intelligent than both “Secret of the Ooze” and “TMNT III”. This new film never gets any grittier than the original 1990 TMNT film, but that’s okay by me.

The CG animation is exceptionally good. Though it’s not the popular opinion, I believe that CG animated films are a market of untapped potential. I mean, for every action film like TMNT or Advent Children, there are two dozen Shreks, Doogles and Open Seasons. Studios are more interested in copying Pixar’s brand of animated comedies than actually seeing what other kinds of storytelling they could accomplish with the genre. So in that respect, TMNT is refreshing. Now, don’t be expecting this film to be all hyper-realistic just because it’s CGI. It’s a cartoon and it knows it, with character designs that are heavily stylized and occasionally (occasionally) employing “Looney Tunes”-like cartoon sight gags. However, I found this to be anything but a set-back and gave the film a fun charm. You can only take something like Teenage Mutant Ninja Turtles so seriously.

The characterization of the cast is everything you’d expect. Leo and Raph once again take center stage while Don and Mike fall into the backseat. Granted, Leo and Raph’s polar-opposites dynamic is quite interesting, it isn’t anything we haven’t seen before. Mike has always been my least favorite Turtle, so of course I found him rather annoying in the film. He’s there to provide burp gags, puns and generic comedy relief I’d rather do without…but on the bright side, his sewer skateboarding segment was pretty sweet. Don gets the short end of the stick as usual, only popping up to do something technical and then fade away. Splinter was wonderful in this film, thanks mostly to a fantastic performance by Mako. Then there’s April and Casey, who get just as much a spotlight as the Turtles. April runs her own business alongside Casey and has been training in Ninjustsu, apparently becoming nearly as good as the Turtles. Karai and the Foot, I must confess, fall a bit on the wayside. There’s a hint of animosity between her and Leo, but most of their quarrel is shamelessly reserved for the inevitable sequel.

The voice acting is mostly good. There was nothing wrong with any of the actors playing the Turtles, at least nothing I noticed. Sarah Michelle Gellar phones in a rather underwhelming performance as April and her lines are delivered with all the fluidity of a pile of rocks in a tornado. The late and great Mako almost steals the show as Splinter, balancing the stern martial arts sensei with the loving father and throwing in some hilarious character quirks along the way. A terrible shame we’ll never hear him in the role again. Kevin Michael Richardson voices the most prominent of the four generals, General Aquila, and does fine. He’s one of my favorite cartoon voice actors and can sound very villainous when it counts. Patrick Stewart has become quite good at voice acting over the years and plays the sympathetic Max Winters as well as you can imagine. Ziyi Zhang is a bit of an oddity, I must confess. Karai is supposed to be Japanese, but Zhang’s accent is entirely too Chinese sounding. In all likelihood, most Americans won’t be able to tell. And finally Chris Evans delivers a perfectly appropriate performance as the lovable hockey mask-clad vigilante, Casey Jones.

And then there’s the leftovers. Laurence Fishburne, of all people, provides an opening narrative briefly recapping the Turtles’ history as well as the backstory of the villains. Kevin Smith also makes a surprise cameo as the cook at a diner. He actually does a pretty good job. A few more recognizable cartoon voice actors can be spotted throughout the movie if you’re a cartoon buff like me. You’ll notice Jim Cummings as a generic thug who keeps winding up in the wrong place at the wrong time. Billy West also shows up as a news anchorman.

So, all in all, what did I think of the new TMNT movie? Honestly, I liked it. It’s a kid’s action movie, for sure, but there’s hardly anything present to turn off an older audience. There are lots of references and nods to the “classic” TMNT to get the nostalgia rivers flowing, but enough entertainment value to keep from relying on it. Some great fight scenes and a mostly impressive voice cast. Definitely check it out.