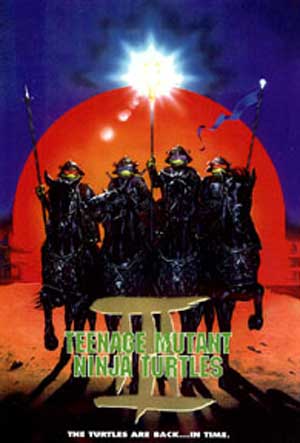 Ask anybody who has seen all three live action Ninja Turtles movies, and I can almost guarantee that most of them (if not *all* of them) will say they hated the third one. Now, I’m not gonna go and say that it isn’t the worst installment in the series, or that it’s an overlooked gem, or anything like that. I will say, though, that it does have a few redeeming factors and that it’s really only slightly worse than TMNT II.

While at a flea market, April O’Neil happens upon a strange scepter of Japanese origin. She brings it to the Teenage Mutant Ninja Turtles (Leonardo, Raphael, Donatello and Michealangelo) as a gift, but accidentally activates it, warping her back in time to feudal Japan. She changes places with Prince Kenshin, the son of Lord Norinaga, a power-hungry shogun waging war against the people of his land. The TMNT waste no time in heading back after their friend, switching places with four of Norinaga’s samurai elite. It seems that Norinaga is being manipulated by the treacherous Englishman, Walker, who wants to trade him guns and cannons for his vast wealth of gold, silver and silk. After rescuing April, the TMNT help the oppressed people under Norinaga’s rule fight back.

There are a lot of reasons why people hate this movie. The first one that springs to mind is the absence of Jim Henson Studios in regards to the special effects. The suits for the TMNT in this film are provided by the All Effects Group and…well…they pretty much suck. Then there’s the jokes in the dialogue; they’re not funny. At all. The writers just slapped in as many random pop culture references as they could manage and assumed that would equal hilarity. I’m afraid that is not the case. Then there’s also the fact that a few voice actors have been changed, particularly Splinter, who is no longer voiced by Kevin Clash. The new voices are noticeably off and, in Splinter’s case, noticeably awful.

There are a few things this movie gets slammed for that I don’t agree with, though. Some people tend to call this film “cheap”, which just isn’t the case. Now, the suit design for the Turtles and the puppetry for Splinter is a terrible down-grade, I will not argue that. However, the overall scope of the film is considerably larger than what was seen in the previous two movies. In the previous two films, the TMNT simply fought villainous thug ninjas and retarded mutants, but this time around they’re traveling through time, battling samurai warriors and freeing a village of oppressed people from an evil shogun and a vile limey bastard. The set design for Norinaga’s castle as well as the numerous samurai warriors on horseback and what-not is anything *but* “cheap”.

Another complaint I hear quite often is “no Shredder”. Well, if you’ve ever read the TMNT comics, you’ll know that the Shredder just isn’t that important of a character. He was in about five or six issues, total, and that’s counting clones (if you only count the original Shredder, then he was only in one issue). The comic is still going today, albeit, on its fourth volume, and is proof-enough that you don’t need the Shredder to have a good Ninja Turtles story.

Is the story for TMNT III any good? It had promise, yes, but the execution fell far from the mark, I’m afraid. There are plenty of good TMNT time travel stories. I mean for example, the time scepter seen in this film is very loosely inspired by the time scepter used by Lord Simultaneous and Renet from the Mirage comics. Perhaps if they’d thrown in Savanti Romero and a few more Mirage-inspired aspects this might have turned out a bit better. As it stands, TMNT III is just kind of…boring.

I will congratulate them on bringing back Elias Koteas as Casey Jones, who co-starred in the first live action film, but was noticeably absent from Secret of the Ooze. Casey-himself doesn’t get to do any fighting, unfortunately, and simply baby-sits the time-displaced samurai. However, Koteas also plays a character named Whit, presumably one of Casey’s ancestors, who gets his fair share of action during the feudal Japan portions of the film. I was a bit disappointed that Casey-proper didn’t get to do any fighting, but I was just happy to see him again. Koteas hadn’t lost his touch with the character, either.

While TMNT II was more kid-oriented, TMNT III is a bit more risk-taking. The villain dies at the end, the TMNT are actually allowed to use their weapons again and there’s even some cursing here and there. It’s not as mature as the original film, but a step upward from part II.

Is TMNT III a bad movie? Yeah, it really is. There are a few things about it worth seeing, but for the most part, I wouldn’t recommend it. The story is completely stand-alone, like an episode of the cartoon, so if you just ignore it you aren’t missing anything.