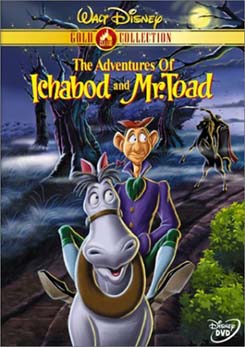 Like most people, I remember several Disney flicks fondly from my childhood. However, I was a weird one. I liked anything and everything scary (thus fueling my undying love for horror films to this day), so naturally the darker Disney offerings appealed to me most. No other Disney movie was watched and rewatched quite as much as “the Adventures of Ichabod and Mr. Toad”, or more specifically, “the Legend of Sleepy Hollow” segment of that film. I swear, that Beta cassette was virtually reduced to dust by the time we upgraded to VHS…in 1997 (we were behind the times in my family).

The film begins with an adaptation of “the Wind in the Willows”, narrated by the great Basil Rathbone. Mr. Toad (Eric Blore) is a flightly fellow with a limited attention span. Just as soon as he’s obsessed over one hobbey, his fancy shifts to something new. On the bright side, he happens to be obscenely wealthy, so he can afford it. Or can he? After being found guilty of motorcar theft, Mr. Toad is sent to prison and finds his mansion under the ownership of a gang of vile weasels. It’s up to Mr. Toad’s friends, Mole (Colin Campbell), Rat (Claud Allister) and Angus MacBadger (Campbell Grant) to spring Mr. Toad from prison, clear his good name and help him relieve the weasels of the deed to his home.

Considering how often I watched the movie as a youth, I was surprised at how little I remembered of this segment. In fact, I don’t think I’d ever watched it in its entirety until the other day. Odd, that. While I can’t say I felt I had really missed anything, “the Wind in the Willows” is a fun short film at any rate. I was most surprised when I saw the weasels and realized that they were the same group of thugs who appeared in “Who Framed Roger Rabbit”. I had always thought they were made up for that film. So it’s the little things that surprised me. Basil Rathbone’s narration was great since he’s got a voice worth listening too. Strangely, I don’t think I’ve ever seen any of his work on Sherlock Holmes. I actually recognize him best for a series of Edgar Allen Poe books on tape which he narrated.

Now to the part of the movie I really love; legendary crooner Bing Crosby narrates Washington Irving’s “the Legend of Sleepy Hollow”. A new schoolmaster has just rolled into the backwater town of Sleepy Hollow, Ichabod Crane, and he’s sweeping all the ladies off their feet, particularly the lovely Catrina. This doesn’t sit well with the town’s hero, Braum Bones, who decides to play on Ichabod’s superstition to get even and spins him a yarn about a spectral Headless Horseman who chases travelers who wander to close to the local cemetery late at night. This folk tale turns out to be more truth than fiction, as Ichabod becomes the prey of a sword-wiedling, pumpkin-throwing headless lunatic on a thundering steed.

Often considered the perinneal adaptation of Irving’s world-famous short story, Disney’s version of “the Legend of Sleepy Hollow” withstands the test of time for a reason: it freakin’ rocks. It starts out rather whimsical, with lots of upbeat songs and cartoonish sightgags to keep you smiling, but as soon as Ichabod enters the party at Catrina’s estate, the atmosphere takes a turn for the ghoulish. The entire chase sequence between Ichabod remains one of the most exciting and heart-pounding moments from any Disney film, with some of the best animation they had ever produced at the time. The Headless Horseman himself is a grand villain and one you rarely see in Disney films today. He’s a blood-thirsty madman with an echoing, otherworldly laugh that actually is kind of frightening (for a kid’s movie, I mean).

I think what really sets “the Legend of Sleepy Hollow” apart from other Disney adaptations of popular stories is that they play it straight and adapt it accurately. Ichabod, the hero of the story, loses and Braum Bones, the secondary villain of the story, wins and even gets the girl. Had this film been made today, Disney would have no doubt altered the ending to all Hell and made it as happy-go-lucky as possible, but back in 1949, Disney was a bit more risqué.

There are lots of great adaptations of this story. Tim Burton’s “Sleepy Hollow” is an obvious one, but another favorite of mine is the Rabbit Ears adaptation narrated by Glen Close. And if you ever get a chance to see a Japanese flick called “Robot Carnival”, you’ll find a wonderful homage to Disney’s version of the story in the final segment of the film. Still, when all is said and done, Disney did it best. “The Legend of Sleepy Hollow” is a Halloween tradition in my house; I watch it every year.

So while “the Wind in the Willows” is a tad mediocre, “the Legend of Sleepy Hollow” is utterly fantastic. Due to this, the grade kind of averages out to a B. But individually, I’d give Mr. Toad a B- and Ichabod an A.