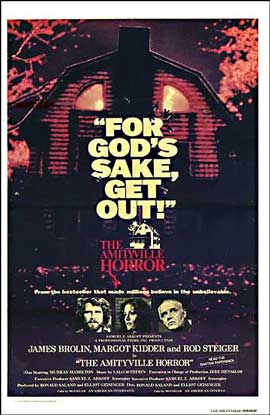 Just about every classic haunted house picture has a certain gimmick that helps it achieve its “classic” status. The House on Haunted Hill had Vincent Price, the Haunting had the use of sound, Poltergeist introduced heavy duty special effects, the Shining took a surrealist approach and the Amityville Horror is notable for firstly, being based on a true story, and secondly, for being filmed on-location at the haunted house itself. Granted, there remains much debate over whether the Amityville haunting was real or a hoax, most certainly, most of the contents of Jay Anson’s novel (from which this film was truly based) is nothing but fiction. Still, it’s a note-worthy gimmick which adds to the film’s realism and the sense of dread while the ghostly phenomenon runs its course.

In 1974, Ronald DeFeo, apparently without motive, shot his parents, brothers and sisters with a shotgun as they slept. He claimed that voices within the house drove him to commit the murder. Only one year lady, George (James Brolin) and Kathy Lutz (Margot Kidder), along with their three children, moved into the house on Ocean Avenue, purchasing it for an unbelievably low price (considering the home’s size). Almost instantly, strange things begin to happen which terrify the family. Disembodied voices scream “Get out!”, items disappear without a trace, doors and windows open, close and lock seemingly with a mind of their own, Amy, the youngest of the children, is befriended by an invisible creature named “Jody” and a strange force seems to have taken hold of George, turning him into a violent and angry man. 28 days after moving into their new home, the Lutz family fled in the dead of night, leaving behind all their possession.

You know from the beginning how this film will end, it’s the build-up to what finally drives the family to flee their home in terror that’s so gripping. The Amityville Horror is a more traditional haunted house film, not quite as restrained as the Haunting but less special effects and in-your-face heavy as the Shining. I’d place it more in the same vein as the Changling. Save for a brief glimpse through a window, you never get a solid look at the force dwelling within the house. The haunting is more of a “classic” style, like something you’d expect to happen in reality or read in a book about haunted history.

Speaking of books, I’ve read the original Jay Anson novel, and this film is actually a rather true adaptation. The only real note-worthy deviation from the book is the climax of the film. The ending in the book isn’t quite as “exciting” as the version in the film, and they really punch it up with some extra action sequences. I can’t say I really approve of this extra “oomph”, as it’s a bit over the top and betrays the down-to-Earth approach the rest of the film had been taking.

The scares in this film are restrained at times but effective never-the-less. Pairs of glowing eyes watch the Lutz family through bedroom windows, there’s the infamous “Get out!” sequence everyone remembers best, there are doors exploding off their hinges and, in one of the better scares, George gets a brief look at Jody through a window from outside the house. Probably the best effect used in the film are the classic windows of the house itself. The use of lighting behind them gives the appearance that the windows are like eyes, squinting angrily from time to time. The house really is spooky looking, almost like a skull. A shame that, in reality, the house’s exterior was completely remodeled to have that appearance changed. A real bummer, since the house on Ocean Avenue is a part of history.

The Amityville Horror spawned a franchise of awful sequels and even a very ill-conceived remake starring Ryan Reynolds which you should really do your best to avoid. The original Amityville Horror, though, is one of the better haunted house flicks available. It can take a while building up, and is a bit long (2 hours), but it’s worth the time spent.