The Horror of Amityville

How many of you liked the Marcus Nispel remake of The Texas Chainsaw Massacre? All of you, great. Well, you were probably thrilled to see that the same folks who brought that movie to you would also be bringing the remake of The Amityville Horror, using the same gritty and grainy visuals used in that chainsaw movie. And with Ryan Reynolds in the lead, how can you go wrong? The trailer was pretty scary, or at least it was to the 8 year old in the front row. It had to be good.

Well, yes and no. 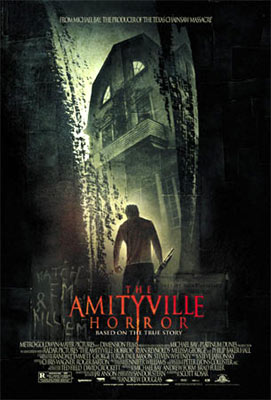 The premise of the film (actually the book) is based on the pseudo-true story of the Lutz family and their 28 day stay at 112 Ocean Avenue, a house in which Ronald DeFeo killed his entire family on a dark and stormy night less than a year earlier. Naturally, as with all houses in which six family members of the house are shotgunned to death, 112 Ocean Avenue comes complete with pesky flies, a ghost girl named Jodie who seems to want to kill people so she can have playmates, and the annoying tendency to wake up at 3:15 every morning. So begins the adventures of George Lutz (Ryan Reynolds) and his crazy adventures.

Whether the story is valid or not is a moot point. The question is, is this movie good or even scary? Honestly, the first two thirds of the film are well done and purposely manufactured for scares. Like The Texas Chainsaw Massacre (2003), the visuals of Amityville are crafted with a very dirty, old fashioned, and disorienting grain with heavy contrasts and great attention to lighting. It is a very good, unsettling effect that is most equatable to looking at old fashioned photography. The story itself is a refreshing take on the haunted house routine and does it much, much better than any movie has in the last few years. The only time the scares fall flat is when we are shown, through visual trickery, the unseen enemy. I’d say the moment the movie starts going downhill is when they show the ghost girl being held up to the ceiling by a bunch of hands. Just the sheer amount of CG work that had to go into that, combined with the way it just hits you in the face, is enough to already give the film an A-. But the points just get subtracted from there.

The final act of the film is the textbook example of what NOT to do in any film: do not rip off other movies of the genre. The last act makes a radical departure from the book by trying to fix the mystery of the house in its own way: hey, guess what, it’s actually built over a secret room in which some dude liked to kill people! So we’re treated to 40 minutes of the greatest rip offs of all time, including The Shining, Poltergeist, and The Hand That Rocks the Cradle. Originality is thrown out the door in favor of a lame excuse for a plot resolution. The film would have been sufficienty creepy if we were to just assume that it was a house with bad stuff inside and that no one should live there, but no.

For what it’s worth, the film does have good intentions and is not totally doomed. But we’ll have to wait for the next remake to see if changes can be made.