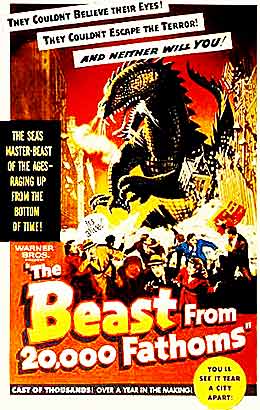 The Beast from 20,000 Fathoms is one of the most influential and well-made movies to come from the “Atomic Age” of horror films. The formula for the film may seem fairly generic these days, but it set a precedent that would inspire films such as Toho’s Godzilla and practically every other giant monster disaster film afterward.

In the North Pole, atomic bomb testing frees a humongous dinosaur, a rhedosaurus, trapped in ice for over a million years. Professor Nezbit, the only witness to the dinosaur’s awakening, tries in vain to warn the military and the scientific community of the approaching terror, but is too late. The rhedosaurus emerges from the coast of New York City and lays waste to the Big Apple.

A very ambitious film, considering it was made in 1953. Ray Harryhausen doesn’t disappoint on the special effects front, with the effects for the film holding up surprisingly well after 53 years. They’re nearly on par with stop-motion animation done in films like Return of the Jedi. Harryhausen gives the rhedosaurus numerous animalistic nuances and details, from the way it bobs its head to the lashing of its tail. The beast appears remarkably realistic. It also interacts with the environment convincingly, especially during the New York City segments. There are moments of obvious bluescreen shots, particularly when the beast chomps on the police officer, but for the most part the effect is achieved quite admirably. It topples buildings and crushes cars with the effects rarely taking the audience out of the experience. Probably the best sequence in regards to the special effects is the final battle where the military takes down the beast trapped inside a flaming rollercoaster.

More than a few similarities can be drawn between this film and Toho’s Godzilla, which was produced only a year later. Indeed, many members of the Beast from 20,000 Fathom’s production team lambasted Godzilla for being a blatant rip-off. This is a debate bound to last forever, but I personally find enough differences between the two films to view each on their own merits and find both movies enjoyable. In fact, the 1998 Roland Emmerich Godzilla film would definitely have more in common with this movie than the original 1954 film.

The Beast from 20,000 Fathoms is short, clocking-in at roughly 79 minutes. It gets straight to the point and doesn’t bog the pace down with needless characters and wacky antics. There is the mandatory romance between the two leads, though even that is glossed over considerably once the beast lays siege to New York. In this respect, the Beast from 20,000 Fathoms holds up to repeat viewings by varying age groups quite well, particularly children, who only want to watch the movie so they can see the monster crush buildings. While this might not be a positive testament to the patience of today’s movie-going audience, it does work in this movie’s favor, giving it a practically in-definite shelf life.

The Beast from 20,000 Fathoms is a very early “popcorn flick”, lacking most of the social commentary you’d find in, say, the original Godzilla. Still, this approach coupled with some fantastic special effects makes it fun to watch on numerous occasions.