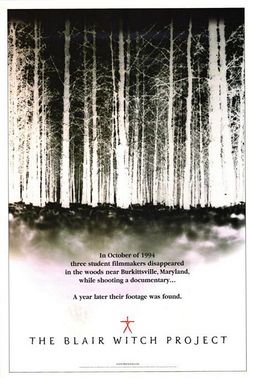 “The Blair Witch Project” is one of the most unique and effective horror films I’ve ever had the pleasure of seeing. So totally different from most everything else out there, the only other title which even comes close to compare is “The Legend of Boggy Creek”, and even that is a bit of a stretch. A textbook example of minimalist horror, “Blair Witch” forgoes the excessive gore, special effects and even camera-work of common horror film trends and presents us with a very raw and very real-looking picture. A lot of people reject the film because it is too different, too overhyped or even because it’s too popular (the best way to stay trendy is to hate everything that’s popular), but I stand by my opinion that it is one of the most original and unique horror flicks ever made.

In October of 1994, three student filmmakers, Heather, Joshua and Michael, set out into the woods of Burkittesville, Maryland, to shoot a documentary on the folk legend of the Blair Witch. They never returned. Five years later, within the ruins of a decrepit shack deep within the woods, their camera footage was found. Presented is a terrifying look at the last few days of their lives, as they are stalked by a mysterious presence and their sanity begins to unwind.

What really turned “The Blair Witch Project” into an undeniable hit back in 1999 was the marketing. Through some very clever tactics, the producers behind the film managed to fool a large portion of the general public into thinking the whole thing was real (similarly, that tactic was employed in the 70’s by the producers of “Cannibal Holocaust”, to mixed results). Indeed, if one didn’t know any better, it was really pretty easy to be fooled by the ruse. Probably the best implementation of this little fib was a television documentary special called “Curse of the Blair Witch” which ran repeatedly on the Sci-Fi Channel. The entire special is played with a straight face, creating an elaborate back-story for not only the Blair Witch, but the small Maryland town from which she originated. They even went so far as to create vintage-looking footage of obscure 1970’s occult documentaries which delve into the Witch’s legend. The entire documentary is genuinely convincing and could easily swindle one into buying the Witch’s existance.

Of course, the whole thing was a load of bull. There has never been any folk legend of a Blair Witch…but people didn’t know that. The marketing for the film was so effective it managed to trick a whole lot of people into falling for it, which resulted in a seriously strong box office return (which is especially impressive, considering how dirt cheap this movie was to make).

As already mentioned, this film is minimalist horror at its most bare. You never see the Blair Witch or anything even remotely monstrous. All you hear are the noises and all you see are the various trinkets left behind by some unseen presence. For anyone who has ever gone camping, these scare tactics should strike a very strong chord. Since the entire film is done in a faux-documentary/home video style, the audience really feels like they’re lost in the woods with these three college students and you actually share in their dread.

Of course, the effectiveness of the movie rides solely on the shoulders of the three actors who make up the cast. They actually pull it off almost completely without a hitch. You sincerely buy that they’re scared and confused out of their minds as they begin walking around in circles, their compasses stop working and they hear terrifying noises in the middle of the night. There are a few instances of lapsed acting skill which remove you from the experience, most notably when Mike reveals he threw away the map and starts laughing about it. It seemed a bit corny and unbelievable, but other than that the trio of college students really sold the whole thing.

There’s honestly nothing else quite like “The Blair Witch Project”, making it one of the most original horror films out there. The DVD (which comes with the excellent “Curse of the Blair Witch” TV special) can be found at bargain bin prices these days and is a steal at twice the price. If you haven’t seen it, I thoroughly suggest you check it out.