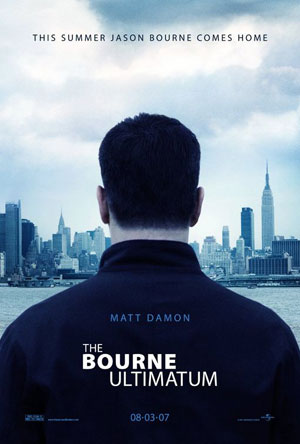 Usually before I got review a sequel I try to educate myself on the previous installments if I haven’t had the opportunity to view them. Unfortunately, time wasn’t on my side and I didn’t have the chance to sit down and watch “the Bourne Identity” and “the Bourne Supremacy”. So I was left with no alternative than to go see this latest installment, “the Bourne Ultimatum”, with only a vague understanding of the characters and the situations. Much to my astonishment, this third chapter in the Bourne franchise is remarkably easy to drop into with little to no prior knowledge of the storyline and fills us newbies in rather quickly without the need of lengthy exposition to remove you from the experience. So kudos on that.

Fugitive brainwashed Government assassin Jason Bourne (Matt Damon) wants his memories back and he wants them now. CIA Deputy Director Noah Vosen (David Strathairn) wants Bourne eliminated before he has the chance to put all the pieces together and expose him and his superiors. It all comes down to a race between Bourne and the CIA to reach all the remaining people with knowledge of the program that turned Bourne into the Government’s private killing machine. Possibly Bourne’s best hope for success is Pamela Landy (Joan Allen), a CIA Director who sympathizes with Bourne’s plight.

When they say that Jason Bourne is “on the run” they aren’t kidding; Jason Bourne spends a good 90% of this movie just running. Up stairs, across rooftops, through apartments…running, running, running. Most of the action in this film revolves around a chase of some sort, whether it be on foot or behind the wheel. Sadly, I think the action is “the Bourne Ultimatum’s” weakest element. As intense as it is, Director Paul Greengrass has an unhealthy obsession with the dreaded “shakey cam” effects that are all the rage in action films these days. I’m usually rather tolerable of the “shakey cam”, as I accept that it’s here to stay, but Greengrass’ ADD-riddled directorial style introduces so many rapid cuts combined with such wobbly execution that those with motion sickness are better off skipping this flick. It can be difficult to tell actors apart during fight sequences or just what they’re doing. During the fight between Bourne and Desh it took me a minute or two to realize that the characters were having an epic battle with a face razor and a washcloth. The car chase through Manhattan also suffers from these needlessly excessive cuts to the point where you can’t decipher who is shooting at who or even who is driving which car.

Critiques of the action direction aside, the script for this film is very solid and the characters are nice and well-rounded. We’re introduced to a few “red herrings”, if I might call them that, who end up not playing very large parts after their dilemmas are resolved. The establishing action sequence with reporter Simon Ross (Paddy Considine), as heart-pounding as it was, felt a bit like a waste. Still, the resolution of Bourne’s storyline is pretty satisfying and I imagine those of you who have seen the earlier installments will get more out of it than I did.

“The Bourne Ultimatum” is an excellent suspense-thriller which only really suffered from some very muddled action sequences. Even those of us who are entirely new to the Bourne experience can enjoy it, and at the very least, it’s inspired me to go out and rent the previous films. With August looking to send this Summer’s blockbuster film season out with a whimper, “the Bourne Identity” looks to be one of your strongest choices.