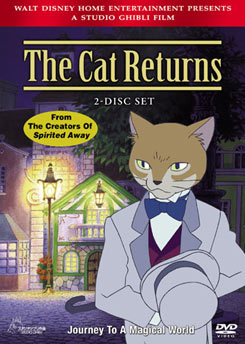 I’m so grateful that Disney has been making these Studio Ghibli films available here in America, and much to my delight, they’re dubbing them extraordinarily well. When I first started “The Cat Returns” I wasn’t sure I was going to enjoy it. One of the things I’ve always enjoyed about Ghibli productions is that they don’t give in to the tired visual trends of most Japanese anime and craft character designs that are aesthetically pleasing on an international level. The designs for “The Cat Returns” are decidedly more in-line with how anime stereotypically looks these days, albeit in a far more restrained manner. To my surprise, these designs leant themselves to the overtly cute nature of the tale and kept away from practically everything I dislike about modern anime aesthetics. Good show.

Haru (Anne Hathaway) is your usual kind but absent-minded Japanese girl who only thinks about boys and hanging out with her friends. One day, after rescuing a strange cat from being run down by a car, she finds herself being thanked by the King of Cats himself (Tim Curry). The rotund King wastes no time in showering her with gifts and then breaks the news that he wants her to go to the Kingdom of Cats and marry his son, the Prince (Andrew Bevis). Haru isn’t in a hurry to get married to a cat, so she seeks help from the Cat Bureau. The dashing Baron (Cary Elwes) takes her case, and along with his associates, the bitter and overweight cat Muta (Peter Boyle) and the crow Toto (Elliot Gould), follows her to the Cat Kingdom to protect her. Escaping the Cat Kingdom won’t be easy, however, as Haru gradually transforms into a cat herself and finds the effects will be permanent if she doesn’t leave fast.

What captured my heart about this film was its wonderful sense of humor. The gags are fantastically well-timed and fantastically well-acted, running the gamut from being side-splitting to just flat-out adorable. Disney has assembled another phenomenal voice cast for the English version, with each of the actors giving the characters so much personality you come to love every one of them. Anne Hathaway astounded me with her performance as Haru, with her voice being so natural and fun that it practically made the movie. Haru might have come across as a rather generic lead heroine had it not been for her stellar performance. Peter Boyle’s crass but lovable voice was made for the character of Muta while Tim Curry is always a joy to listen to. I suppose the only nit to be picked in the voice-over department was the addition of Elliot Gould as Toto. Gould has a great voice and delivered a fine performance, but with Toto having such a small role in the film it seemed a little superfluous. And as talented as Gould is, there was nothing about Toto’s character that seemed to scream out “this guy should be voiced by Elliot Gould!”

Like all Ghibli films, “The Cat Returns” is over-flowing with a charm all its own. It is a very silly movie, with the dangers and threats coming across more jovial than frightening or heart-pounding. It’s a fun break from more serious offerings with a very light tone that never dares to break the cute and whimsical mood. I’ve already complimented the film’s sense of humor, but I feel it deserves a second high-five. There are so many gags going on in this movie that if it doesn’t make you laugh it’ll at least make you smile from start to finish. I especially liked the King’s “Secret Service” cats.

While “The Cat Returns” may look a bit too “anime” for my tastes, it has all the wit and charm of any other film in Ghibli’s library. It’s regrettably short, unfortunately, clocking in at only a little over an hour. Still, it flows well and keeps you entertained all the way through. One of the better Ghibli films I’ve have the pleasure of watching and one I’d highly recommend.