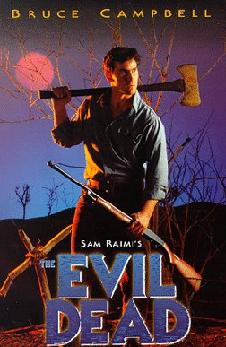 The Evil Dead trilogy. At one point, it was one of the most underrated, almost ignored horror franchises out there. Then the internet happened, and holy crap, now EVERYBODY has seen Evil Dead franchise. Your next door neighbor can recite the one-liners by heart, and all your pals adore Bruce Campbell for the cinematic badass he’s always been. With boatloads of DVD releases, a video game series and a line of comic books, the Evil Dead has hit the big-time at long last. But the franchise started with some humble, low-budget beginnings.

A group of college kids ride up to a secluded cabin deep in the woods for a weekend of partying. While there, however, they happen upon an old tape-recorder left behind by an archeologist translating the various spells and incantations within the Book of the Dead. They play the tape and awaken a dark force within the woods. Gradually, the demons possess the hapless students one-by-one until only Ash is left. Forced to dismember his own friends and family, as well battle forces from beyond reality, Ash has to make it through the night with his sanity intact.

The one-liner-spewing Ash we know and love is not present in this movie. Instead, Ash is a bumbling wuss who has a problem with bookshelves falling over on him. It’s not really a bad thing, as Ash’s character development is one of the best things about the trilogy. Ash is a little easier to associate with, as he’s basically a normal guy being pit against some pretty freaky challenges. And they kick his ass. Consistently. The end of the movie, when the house starts bleeding from every nook and cranny, everything goes insane, and Ash is all alone; it’s one of the best “you are screwed” moments in any horror movie.

The effects in this film are pure cheese. Still, I have an unnatural attraction to goofy stop-motion effects, and the stop-motion disintegration of the possessed students at the very end is amazing. The gore and violence are pretty intense, with characters getting mauled by trees and having their eyeballs pressed into their sockets. You’ve also got the infamous scene where Cheryl gets raped by a bunch of possessed trees. Nasty stuff.

The acting is…pretty bad. And I mean, from everyone, even Bruce Campbell. He improves as the franchise moves along, but he’s pretty young and inexperienced in this installment. “Why are you torturing me like this? Why!?” will have you gnashing your teeth in pain.

The first Evil Dead installment is a genuinely GOOD horror film with just about everything required to make it a classic. It’s not the best in the franchise, though. The staple dark humor is noticeably absent in this film, and without that element to play off of the cheese, this movie really is missing something. At times it tries too hard to take itself seriously, and with the goofy effects and amateurish acting, you just can’t help but point and laugh for all the wrong reasons.

Despite those set-backs, the Evil Dead is a frighteningly dark, incredibly gory and masterfully directed horror film…given the budget.