Exorcism is one of those delightful dinner-table subjects that the whole family can enjoy. It is also one of the most widely misunderstood and ridiculed subjects in the post-modern world, incompatible with today’s notions of civilized society. Many television specials have covered “live” exorcisms performed by ministers and self-proclaimed healers on supposedly possessed people who, to the intelligent viewer, are simply histrionics, epileptics, or outright crazies. It makes religion, and Christianity in particular, look stupid.

The problem with exorcism is at its core rooted in where to start. Do we look at exorcisms performed by Presbyterians? Methodists? Buddhists? To gauge the validity of exorcism, people tend to be aversed to look at the source: Roman Catholicism, which has been the crowd-pleaser and leader of mainstream concepts of exorcism since 33 A.D. With the Ritual Romanum in hand, the Catholic Church has set the standard on performing exorcisms with meticulous precision. Protestantism has since developed its own fractured forms of diabolical removal but without the flare or authority that the world sees in Rome.

A brief understanding of Catholic exorcism is necessary to appreciate the movie from a more precise perspective: Catholic exorcisms are rarely performed relative to the days of old and are not implemented unless the supposed possessee has passed a review by medical examiners ruling out a conventional, medically sound answer to explain the person’s behavior. This includes strange acquisition of foreign languages, vomiting of alien objects, contortions, and supernatural levitations. That is when the holy water comes out. No exorcism is allowed to be filmed or sensationalized, which is one reason why you never see Catholic exorcisms on Dateline (and one reason why most people think that the Church has something to hide). The Church intriguingly merges theology and science in its combat of demonic forces and provides a very positive opportunity for science to step in. 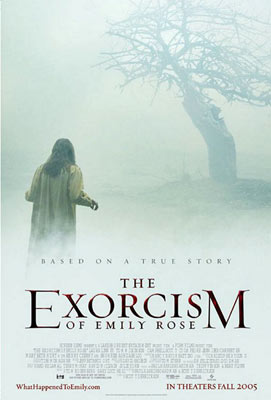 Which is the prime reason for why The Exorcism of Emily Rose is such a success. Part courtroom drama, part horror movie, part educational, and all suspenseful, The Exorcism of Emily Rose is a carefully filmed movie that takes a provocative and thoughtful look at exorcism while still taking subtle cheap-shots at trying to scare the crap out of you. The story is loosely based on the case of Anneliese Michel, a German girl who did not survive a Catholic exorcism and whose exorcists and parents faced jail time for negligent homicide (prompting the Catholic Church to put even stricter regulations on its physician verification prior to performed exorcisms). The events in the movie take great liberties with the actual tale but that’s not really the point: the point is the present to us, the viewer, a fictionalized exorcism in as “true to life” a view as possible by clever use of flashbacks, replays, and scientific evidence (or counter-evidence).

The movie only slows down, ironically, when it feels the need to provide an even-handed point of view from the “exorcisms are crap!” and “exorcisms are some real sh*t!” crowds. How does it manage? Well, you throw in some shots of Father Tom Wilkinson seeing a shadowy fellow who may be the devil. Then you throw in some shots of the prosecutor being a complete ass. Then let’s have the hot lawyer start sensing something amiss in her apartment at 3:00 a.m. Then let’s show the prosecutor… well, keep being an ass. And so forth and so on.

But this volley of the spirtual versus the religious, faith versus rationality, and where they interact is what makes the movie so enjoyable from both a random viewer and intrigued religious perspective. We are finally shown Linda Blair unmasked and on trial, exposed and vulnerable. And at the same time, we find ourselves prey to the old addage: “if you cannot show them God, show them the Devil.”