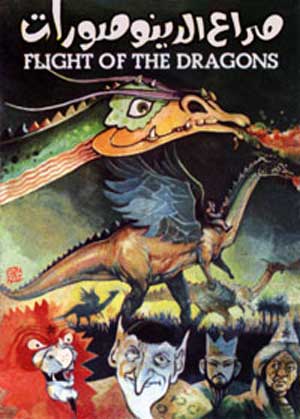 You know that saying “they just don’t make them like they used to”? As clichéd as it is, it rings true. Rankin-Bass, outside their stop-motion holiday specials, never really received the notoriety that Disney and Don Bluth obtained through their efforts of high-quality fantasy animation. Rankin-Bass’ films were considerably darker and more violent than the competition, with stylish Japanese animation rivaling the American productions. And while their reign was sadly short lived, Rankin-Bass managed to release three of my all-time favorite animated fantasy films: the Hobbit, the Last Unicorn and, you guessed it, the Flight of Dragons.

Based on the Peter Dickenson book, “the Dragon and George”; ages ago, the worlds of magic and logic lived side by side. However, the mortals of Earth began to choose logic over magic, and as their belief in magic waned, the magical beings of the world began to thin out. Carolinus (Harry Morgan), the Green Wizard, summons a meeting of his brothers to discuss the matter. The wizards agree to consolidate all the remaining magic of the world into an invisible place called the Realm of Magic, before it all dies out. However, Ommadon (James Earl Jones), the vile Red Wizard, refuses and declares that he will use his magic to influence the mortals to lay waste to the Earth. To counter this threat, Carolinus summons a scientist with an affinity for fantasy, Peter (John Ritter), from the 20th century. Peter is to lead a quest to take Ommadon’s red crown and save the Realm of Magic. However, shortly after arriving, Peter is accidentally merged with a dragon named Gorbash (Cosie Costa). Peter is distraught, as he does not understand how to be a dragon. Mentoring him is Smrgol (James Gregory), Gorbash’s elderly uncle, and accompanying him on his journey is Sir Orin (Bob McFadden), the chivalrous knight, Giles of the Treeptops (Don Messick), the cowardly wood elf, and several others.

Animated fantasy films geared for family viewing just aren’t made like this, anymore. Animated films these days have to be filled with overbearing celebrity voice-overs, “clever” pop culture references and endless amounts of trendy humor. Rankin-Bass’ films never put celebrity flavors of the month over the story (I’m looking at you, Shark Tale, Robots and Shrek). This isn’t “JAMES EARL JONES AND JOHN RITTER in the flight of dragons”. The voice acting in this movie is excellent, to say the least. James Earl Jones is perfect as the villainous Ommadon, and surprisingly, doesn’t channel much Darth Vader into the role. John Ritter plays a fine Sir Peter, who gets the whole wide-eyed “boy this is great!” attitude across wonderfully. The other players are all excellent, as well, especially Bob McFadden as Sir Orin and James Gregory as the grumpy Smrgol. Don Messick, one of the greatest cartoon voice actors, stands out a bit too much, I’m afraid. His voice for Giles is fine, but his voice for Lo Tae Shao, the Golden Wizard (of oriental influence), is a bit too stereotypically sing-songy and sort of takes you out of the experience just a little. The Golden Wizard is a minor player, all things considered, so it isn’t that big of a deal.

The animation was provided by Japan’s Topcraft Studios, which was one of their finest animation studios at the time. Most of the animators who worked for Topcraft eventually left to form Studio Ghibli. So, as a result, the animation in this film is just as pretty as in their work for the Last Unicorn, the Hobbit or Nausicaa. The animation direction was provided by Fumihiko Takayama, whom you anime buffs might recognize for his work in Gunparade March, Gundam 0080 and Bubblegum Crisis. The assistant animation director, Katsuhisa Yamada, is known for his work on Genesis Climber Mospeada (called Robotech the New Generation in the US), Gatchaman (called Battle of the Planets and G-Force in the US) and as the animation director for both Hobbit and its unfortunate sequel, Return of the King. Though the animation might seem a bit “dated”, it remains beautiful by 1982 standards.

I suppose if I had to think of any real complaint about the film, it would have to be that it’s a fair bit too cut-and-dry. There aren’t a lot of plot twists and it doesn’t take much imagination to figure out what happens next or even how the film is going to end. Still, if you keep in mind that this film was produced for a family audience, which includes children, the plot isn’t any less complex than what you’d see in a Disney or Don Bluth offering. Not all the characters get too fleshed out, particularly the ones who join Sir Peter’s quest halfway through. I’ve never read the book, but I imagine they have more personality and depth in that version.

As of this writing, Warner Bros (who now own Rankin-Bass’ library) has not seen fit to release the Flight of Dragons on DVD, though they’ve covered practically every other Rankin-Bass film ever made. It seems almost a crime, really, considering how good a fantasy film this is. I hope Warner Bros rectifies this oversight sometime very, very soon. Still, if you can find this film on video or through “other means”, I can’t recommend it enough. Your kids will certainly love it, and there’s a good chance you will, too.