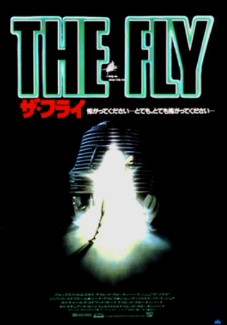 David Cronenberg is the master of the truly weird. With movies like “Videodrome”, “Naked Lunch”, “the Dead Zone” and “Scanners” under his belt, it’s hard to argue that point. Cronenberg’s remake of the classic Vincent Price horror film, the Fly, is one of his strongest accomplishments, departing enough from the original to keep from being a retread but maintaining enough aspects so as not to alienate fans of the original. And on top of that, it’s *really* gross.

Scientist Seth Brundle (Jess Goldblum) has a terrible motion sickness problem. To rid himself of vehicular travel once and for all, Brundle has built a teleportation device which he calls a “telepod”. He invites journalist, Veronica Quaif (Geena Davis), to document his progress. But there’s one problem, the telepod can’t transport living matter. Brundle eventually believes he’s worked the kinks out of the telepod, and in a moment of *very* bad judgement, sends himself through. Unfortunately for him, there happened to be a fly in the pod with him. Brundle comes out feeling like a million bucks, but the positive effects don’t last long. Gradually, Brundle begins to decay and transform into something inhuman.

Cronenberg goes all out with this film, taking every opportunity he can come up with to make the audience cringe in their seats. From fingernails falling off, to oozing pus to gratuitous gore. Brundle’s ailment is very reminiscent of cancer, albeit to the maximum extreme, and this gives the film an almost realistic vibe. You know that out there, there are people suffering a similar (though much less hideus) fate and you can’t help but really feel for Brundle’s character.

Though often recognized for being an excellent science fiction and horror film, at its core, the Fly is a romance film. The love between Brundle and Veronica is extremely strong and her dedication to him even after his predicament takes a swing for the worse is beautiful. It leads into one of the most tragic and depressing endings of any film I’ve ever seen.

The casting of Jeff Goldblum as Brundle was just absolute genius. Goldblum is well known for being so fidgety and high-strung, he was ideal to play a man turning into a fly. His natural mannerisms and charisma only add to the believability of Brundle’s decay. The monster of the film, the fully transformed Brundle-Fly, doesn’t appear until the very end. However, it’s very much worth it, and even after he has transformed into a hideus creature, you still have a strong enough emotional investment in the character to continue caring for him, puppet or not. The effects are excellent in the most disgusting ways possible, such as ears falling off, or just plain impressive, like great sequences where Brundle climbs walls and ceilings like Spider-Man.

The Fly is one of the best films from the 80’s and a remake that truly trumps its predecessor. I can’t rate this film any lower than an A, it’s just too perfect.