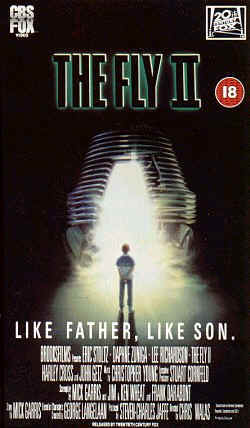 “The Fly II” seems to get a pretty bad rap whenever I talk to people about it. Sure, it’s a far cry from David Cronenberg’s epic sci-fi tragedy and definitely falls more into the category of a standard horror film, but it’s still a pretty good horror film. Director Chris Walas does his best to keep from copying the film’s successor and puts together an original yet familiar sequel that’s entertaining in its own right. While I wouldn’t hold it up on the same mantle that I would the previous installment, I would never go so far as to trash the flick like so many others tend to do.

The late Seth Brundle’s mutant son, Martin (Eric Stoltz), has a terrible condition which causes him to age and mature at a hyper-progressive rate. At only age five he’s already the physical and mental equivalent of a twenty year-old. Forced to live in the sterile environment of the Bartok Industries building and raised by the two-faced Anton Bartok (Lee Richardson), Martin is coaxed into continuing his father’s telepod project. Martin hopes to use the pods to find a cure for his condition, while Bartok intends to use the device for military contracts and plots to simply cast Martin into specemin study as soon as his usefulness is over. Martin’s condition rapidly accelerates, turning him into a grotesque pupa that will eventually turn into a creature entirely worse. Martin’s only hope is Beth Logan (Daphne Zuniga), an employee at Bartok Industries who has fallen in love with him.

“The Fly II” knows that it can’t outdo what the original film accomplished, so it doesn’t really try to be more artistic or more thought-provoking; it simply tries to be an entertaining horror movie. And really, that’s all this movie is. While it shares similarities with the last movie, Martin’s ailment is considerably different than Seth’s, with his transformation into a giant cocoon and eventually a hideus fly-monster all-together different than how the previous installment went about it.

While the effects used on the mutating Martin are certainly ugly and disgusting, Chris Walas doesn’t go for the gross-out factor nearly as much as Cronenberg. The Martin-fly itself also looks nothing like the unsightly mishmash of buldging parts that was Brundle-fly and is very symmetrical and more in-line with what you’d expect a monster to look like. It sort of reminded me of the Violator from “Spawn”, but only sort of. The effects which bring the Martin-fly to life are surprisingly good, for the most part. You can tell, though, that Walas makes a distinct effort to keep you from seeing the whole monster all at once since it required probably a team of people to operate it just off camera. So usually you only see just its feet or its head or simply its body dropping limply from the ceiling for a split second. After a while this tactic becomes fairly obvious, but it still doesn’t withdraw too much from the effects.

Eric Stoltz delivers a fine performance as the socially inept but good natured Martin Brundle. While Daphne Zuniga’s performance as Beth isn’t anything to write home about, I give kudos to Walas for not repackaging the romance between Jeff Goldblum and Gena Davis from the previous movie. Lee Richardson’s Anton Bartok is a bit of a cookie cutter “evil corporate executive” villain stereotype, but I will say this; his cumuppance at the film’s climax is wonderful. One of my favorite voice actors, Garry Chalk, has a small part as a jackass security guard who pushes Martin around and winds-up getting his in the end. I just thought I’d point that out since, hey, he’s Optimus Primal on “Beast Wars”.