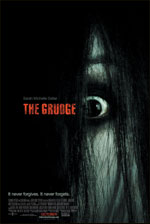 A remake of a popular Japanese horror film, “Ju-On”, the Grudge is a mediocre haunted house picture, at best. I suppose the major detractors to the film are that it’s quite honestly inferior to the original (unlike another prominent US remake of a Japanese horror film, the Ring, which completely outdid the original) and that the whole “scary female ghost with really long hair” shtick is just getting old. I swear, after the Ring came out, the Japanese began flooding the horror market with bad Sadako (Samara to us Americans) wannabes.

Karen (Sarah Michelle Geller) and her husband, Doug, have just moved to Tokyo and Karen has gotten a job working for a care agency. She is instructed to help an old lady living in a gloomy house, but as soon as she gets there she notices things aren’t quite right. Karen quickly encounters the vengeful spirits residing within the house and makes their “hit list”. Anyone who so much as enters that house becomes the target of the violent ghosts within it, and there’s no where you can hide.

Most of the best or creative parts of the movie are taken directly from the Japanese version; such as the bit on the elevator or the ghost under the covers. They’re still good scenes, they’re just not anything new. The majority of the original scares crafted for the film fall rather flat as too many rely on the “loud noise” approach rather than anything atmospheric. I will say this; I really liked the bit in the stairwell at the office building, which is probably the best original scare in this remake. The ending is also somewhat of a let-down. Rather than providing some closure like in the original, they went the “cliffhanger”-route just so we could get a sequel.

The movie is edited in a non-linear format, with random flashbacks inserted throughout the film. This can be a little confusing at first, as these flashbacks tend to come completely unannounced, but you quickly get used to it. I actually liked this approach, as the movie only provides certain information about the house’s horrific past when the time is right. It can provide a little more tension to a scene and make others more meaningful. Still, it’s nothing that hasn’t been done before (and done better) in other movies.

Although I will recommend the Japanese version over the remake, I suppose if you can’t stand to read subtitles or hate foreign films then you might as well go with this version. It’s very American-friendly. However, considering there’s a better version of the film available, there’s really little point to this one.