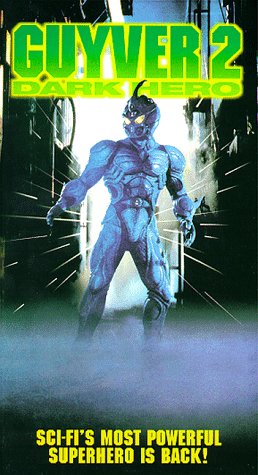 The original live action Guyver film, as fun as it may have been, was a very poor adaptation of the source material. The script was admirable at times, cramming the first 6 episodes into 90 minutes, but the tone and atmosphere was all wrong. The original film was played off as a goofy comedy parody, leaving many Guyver fans rather disappointed. Luckily, Guyver 2: Dark Hero came along shortly afterward with story and direction more befitting of the original manga and anime.

It’s been a year since Sean Barker (David Hayter) became the Guyver, a superhero bonded to a powerful alien control metal called a “bio-booster armor”, and seemingly destroyed the Kronos Corporation and their legions of Zoanid mutants. However, life has not been well for Sean. Between crimefighting, he has been plagued by awful, violent nightmares. His girlfriend, Mizuki, unable to deal with Sean’s new life, has left him. Distraught, Sean packs his things and hits the road in hopes of finding an answer. His travels lead him to a secluded wilderness area where, unbeknownst to him, an alien spaceship, belonging to the same race which created his control metal, crash-landed centuries ago. The Kronos Corporation, now under the command of a new Zoalord, has been dispatched to take the alien remains as well as the prize within: a new control metal! Sean must fight his way through a horde of Zoanoids and get to the ship before the Kronos lackies do, otherwise he’ll have to face an evil Guyver with all his own powers and more!

Okay, this is gonna sound real confusing, but I’ll try and map it out as best I can. The first Guyver film was a loose adaptation of the first six episodes of the anime. The Guyver 2 is a loose adaptation of the second episode of the anime. In the second episode of the anime, a Kronos lacky named Lisker got ahold of the second control metal and became the Guyver II. However, in the first Guyver movie, that angle was dropped for Lisker’s character. Instead, he was just another Zoanoid who ended up being killed at the end of the film. In Guyver 2: Dark Hero, they adapt the concept of an evil Guyver, but with Lisker’s character dead, they create a new bad guy to get the bio-booster armor. The Guyver II as he appears in the film also bears little to no resemblance to the Guyver II as he appeared in the anime.

Even with the cast changes (Sean Barker was played by Jack Armstrong in the first film) and the dropping of key characters, like Mizuki, I find the Guyver 2 to be an all-around superior film to the original. As an adaptation it’s much more respectful of the source material, but as a film in-general it’s a lot easier to stomach.

The budget is noticeably lower than in the original, so the special effects aren’t quite as constantly in-your-face. There are less Zoanoids in this film than in the original but the ones you do get to see are noticeably nastier and more menacing (no rapping Jimmy Walker monsters in *this* movie). The gore is pretty good, with Zoanoids getting decapitated, having their arms broken, eyes gouged out, stabbed in the gut, melted and all sorts of other horrible things done to them. This is much more of a horror-scifi flick, so with the comedy element dropped they’re free to let the blood flow like wine. Probably the most impressive design is the Guyver II who looks very detailed and unique, yet still Guyver-like. The fight choreography for the final battle is also very intense. Unfortunately, some of Sean’s transformation sequences are done with 1994-quality CGI, which is very much a bad-thing.

I’d recommend Guyver II to fans more than I’d recommend the original. If you’re familiar enough with the animated series you can honestly just skip the first flick. It’s a rehash of what you’ve already seen only done with silly comedy bits. Guyver 2, however, is 90% original story with a much darker and more appropriate atmosphere.