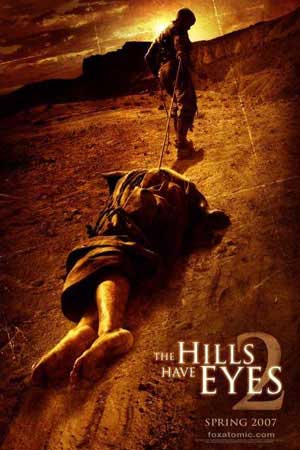 A team of painfully unskilled National Guard trainees are on their way to further training for the war in Iraq out in the barren wastelands of the American South West. Along the way they are ordered to deliver supplies to scientists working in the top secret Sector 16 location. Well, upon arrival, they discover that all the scientists have been killed and eaten by grotesque mutant hillbillies who will stop at nothing to make sure no one gets out alive. Things only get worse from here on in.

While the previous film pit an unsuspecting Average Everyday American Family against Jupiter’s clan of cannibalistic freaks, Director Martin Weisz tries to change things up a bit by pitting the redneck rejects against a troop of victims who should be equipped to fight back. And that’s where this movie fails. I know these National Guardsmen are supposed to be extremely green and uncoordinated but they act like typical horror movie teenagers, making the most imbecilic decisions at the most imbecilic times and never really improving at any point throughout the movie. I mean, for Heaven’s sake, there’s a scene halfway through the movie where they all know hillbillies are out to get them yet one of the Guards wanders off without telling anyone to go take a piss all by herself in a secluded location! So don’t be expecting any of the victims to fight back using their military training; they basically just run around in circles, screaming and acting like clichéd scary movie fodder for 90 minutes.

“The Hills Have Eyes II” tries to counterbalance its idiotic characters, transparent script and subpar acting with a healthy dose of shock value. As someone who enjoys movies like “Cannibal Holocaust”, I find that even if everything else is utterly terrible, a movie with intensive shock value can still be entertaining. Of course, not everyone is me.

Anyhow, there’s plenty of gore and ugly monster-people, even for a modern day R-rating. You shouldn’t be too disappointed in that regard. While the previous installment only implied or threatened the female characters with disgusting hillbilly rape, this film goes all the way. It’s not too graphic, at least as far as rape scenes go, but it certainly isn’t pleasant. Still, “shock value” and all that. Fine by me.

The kills in this movie are extremely reminiscent of the old Wile E. Coyote/Road Runner cartoons, whether it was intentional or not. I mean, you’ve of course got the mandatory falling off cliffs bit, except instead of disappearing in a cloud of dust, their brains splatter all over the rocks. I think the funniest one was a scene where a guy tries to carry away a crate of TNT without first disconnecting the detonator switch. Do these people not watch cartoons? By the end of the film I was half expecting a sequence involving Acme rocket-skates or perhaps a giant catapult.

“The Hills Have Eyes II” isn’t going to stand out in any horror movie history books, and indeed it shouldn’t, as the whole thing is rather generic. The shock value is fine but it’s nothing you can’t see elsewhere. Still, if you’ve got nothing better to do and you like predictable horror movies, then by all means…