Marvel was having a good streak of movies beginning with 2000’s X-Men and reaching its climax with 2002’s summer slobberknocker, Spider-Man. In fact, the teaser trailer for Hulk debuted with Spider-Man and floored audiences with the prospect of seeing the angry, timid Bruce Banner finally revealing his cinematic colors. 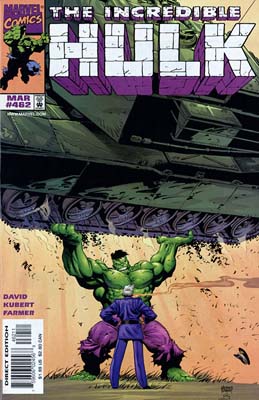 It’s just a shame that this movie sucked the way it did. You thought Daredevil was bad? This movie makes Daredevil look like an Oscar winner.

Ang Lee (Sense and Sensibility, Crouching Tiger, Hidden Dragon) adds definite star power as the director of this Geek Tragedy. Forget Eric Bana, Jennifer Connelly, and Sam Elliott: this movie has that dude who directed that Chinese movie with the flying monks and the shallow love story! It’s too bad that most audience viewers didn’t know that the reason Ang Lee is here is because Chinese cinema has been using over-the-top special effects and roof-jumping superhumans for years now: Ang Lee was so low on the totem pole that he had to come here to make it seem new and innovative. His directing style leaves something to be desired, but for Hulk he does manage to toy with the self-awareness that this is a comic book movie. The entire movie utilizes shots that involve side-by-side panelling (like they did in the 60’s and 70’s, though this time it’s supposed to mimic the panel work in comic books) and the clever use of cuts and sweeps to transition from one scene to the next. It is entertaining for awhile but gets annoying rather quickly… that is, until Josh Lucas gets blown up and they hold his impacted body in a freeze frame for all of us to laugh at.

Eric Bana and Jennifer Connelly have great chemistry and Sam Elliott is great as always, but their performance is lost in the ridiculously confusing storyline. As we all know, scientist Bruce Banner was caught in a blast while testing a bomb in the desert and was bathed by gamma radiation. Whenever he gets angry, he turns from Dr. Jekyll to Mr. Hyde and morphs into the unstoppable, mentally retarded, destructive green machine known as the Hulk. Simple enough? The makers of this film thought that this was too archaic for modern sensibilities, so they decided to give it the same tune-up that was given to Spider-Man in 2002 (if you remember, Peter was bitten by a genetically altered spider instead of a radioactive one). In this modern spin, Bruce Banner has always had a messed up past and weird flashbacks. He’s experimenting with radiation and Nanomeds (?) to accelerate the healing factor in animals and something goes wrong, bathing him in gamma radiation. He’s not killed, though, and the rest is history… until we find out that Nick Nolte’s his dad, that he was experimented upon years ago in the desert, that daddy still loves him, that there’s killer Hulk dogs after him, that the military wants to stop him from jumping all over the American west, and yeah, the film gets pretty weird after that. The last twenty minutes have the most overly dramatic, forced dialogue I have heard in the last five years and is utterly painful to watch. And Nick Nolte as the Absorbing Man? Ugh.

The special effects are decent but not perfect, as the Hulk still runs like a green Roadrunner and stands out as a saturated behemoth framed against a stark desert background for most of the scenes. When the movie does shine, it’s due to the empathy we feel for the Hulk as a gentle giant, not due to clever special effects or an opportunity to present a comic book movie as a work of cinematic brilliance. Too bad we’re going to have to wait for a remake before we can see the Hulk finally made right.