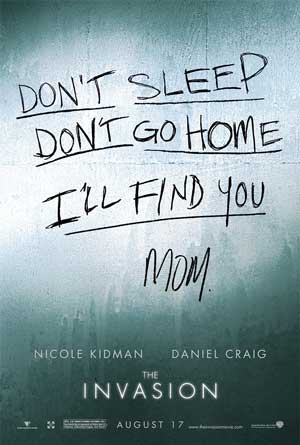 So, how many remakes of “Invasion of the Body Snatchers” do we really need? When I first heard of this upcoming remake I felt it was especially unnecessary, considering the possibilities of it out-doing the best version of the story, the 1978 film starring Donald Sutherland, were slim to nil. To my surprise, this recent reimagining actually managed to change enough about the story and the characters to make it rather interesting, if not a bit redundant and predictable.

When a space shuttle crashes, it brings a terrible microscopic lifeform along with it; one that transforms its hosts during sleep into soulless drones capable of spreading the infection further. Carol Bennell (Nicole Kidman) and her boyfriend, Ben Driscoll (Daniel Craig), catch on very quickly and begin rounding together those intelligent enough to manage a cure. The hopes of finding a way to combat the infection may very well lay within Carol’s son, Oliver (Jackson Bond), who happens to be immune to the virus. Unfortunately, he has been taken away by Carol’s infected ex-husband, Tucker (Jeremy Northam), and she must fight to rescue him.

While a few familiar last names squeak by, all the characters featured in this film are entirely different from those seen in previous versions. Honestly, they could have given the cast completely original names and just viewed the film as taking place during the same events as previous versions but from a different perspective. Aside from the conflict of the “pod people”, the story of this film deviates almost entirely from any other version of “Invasion of the Body Snatchers” as well, keeping it pretty fresh, all things considered. Anyhow, that’s just my opinion.

While, I didn’t feel a new version of the film was really needed, I will admit that this telling was actually pretty enjoyable. Nicole Kidman delivers a mighty fine performance as a psychiatrist forced to deal with the “pod people” and rescue her son. The whole thing about Oliver being the key to curing the infected really falls into the background, with Carol’s determination to rescue him being the meat of the story. Making the main character a psychiatrist instead of a health inspector was a nice twist, as one would assume a psychiatrist would be more adept at spotting the changes in people’s personalities and their behavior than someone who looks for rat droppings for a living.

Daniel Craig also provides an enjoyable performance as Carol’s boyfriend, though his role is part of the film’s lesser focus. Still, Craig’s a great actor and although there was nothing particularly “awesome” about his character, his part was very solid.

They take a few liberties with the concept of “pod people” to the point where I wouldn’t really say there were any “pod people” in the actual movie. Well, not in the way we recognize them. People are infected by microscopic spores (which are kinda like pods) that release into the body once you fall asleep. You wake up covered in goo, but there really aren’t any “pods” to speak of. Nevertheless, I suppose this angle makes the idea more believable and less goofy.

One thing I can’t say I liked was the ending, and those are always hard to decry in reviews where you don’t want to spoil anything for the audience. I’ll just say that it falls very short from the sudden and decidedly somber ending of the 70’s version and feels really forced and ham-fisted.