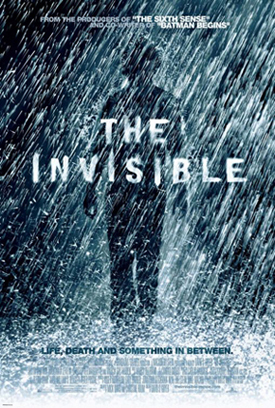 So teenage goth crybabies are making their own Hollywood films, these days? Wait, what am I saying, they’ve been doing that since “The Crow”. Anyway, this flick is pretty much what you’d expect from the trailers and commercials: a trendy teeny-bopper suspense flick starring a Hot Young Cast with plenty of angst and emo rock to spare. Oh joy.

Nick Powell (Justin Chatwin) is your typical high school senior, blessed with a massive fortune and good looks. Yet poor Nick is not happy because his Mommy doesn’t pay attention to him. Then there’s Annie (Margarita Levieva), a scrappy young delinquent from the wrong side of the tracks with a rough family life and a penchant for crime. After a jewel heist and a case of mistaken identity, Annie is lead to believe that Nick turned her over to the cops. In a fit of rage, she kills him and hides his body. Or so she thinks. In reality, Nick’s life is hanging by a thread and his disembodied spirit is forced to roam the Earth, unable to be sensed by any living person. That’s bad news for Nick, as his body can only last a few more days and Annie is the only one who can reveal its whereabouts to the proper authorities. However, Annie is more interested in stealing, taking gratuitous shower scenes and dancing at raves than turning herself over to the cops. And then Nick falls in love with her. Wha?

This movie was annoying from start to finish, from the completely terrible Hot Young Cast to the wretched moral that “if you had a rough family life then it’s A-OK to kill people!” I haven’t had a theatrical experience this annoying since “Delta Farce”. Annie proves to be an absolutely terrible excuse for a human being, stealing jewels, cars, threatening to maim and murder other people, actually attempting to murder another person, shirking responsibility for her actions, threatening to kill anyone who would turn her in and just being an all around unlikable bitch. And yet the audience is instructed to feel sorry for her because she suffered parental neglect and that excuses everything she does. I don’t think so. Director David S. Goyer tries his best to cram that kind of lily-livered moral down the viewer’s throat, but I don’t buy it for a second. Call me cold-hearted if you wish, but I’m not of the clan that views childhood sob stories as a Get out of Jail Free Card, especially not for the degree of ill deeds Annie performs throughout the film.

Goyer never skimps on the teenage angst, slopping it on at every convenient opportunity. “The Invisible” can’t seem to go five minutes without playing the latest emo rock singles kids listen to endlessly as they lightly cut their arms in a desperate plea for attention. I felt like I was in high school all over again; the part of high school I hated. When Goyer isn’t trying to force us to like Annie’s character because boohoo her Dad works the night shift, he’s trying to soften us up to her by giving her gratuitous shower scenes or random trendy rave sequences. I guess this works if you came to the movie with the intention of masturbating, but as far as story and characterization is concerned, it’s all pointless and dull.

As far as the supernatural elements of the film go, I actually saw this story over a decade ago on an episode of “Are You Afraid of the Dark”, so Goyer gets no points for creativity there. Nick’s character is also rather unlikable, amounting to little more than your usual angsty teen who hates his Mom because she has his future planned out for him. His falling in love with Annie feels especially forced and unbelievable. Nick is supposed to mirror the audience (only able to watch and not interact), and his gradual development of affection for Annie is intended to mirror are own. Well it doesn’t. I still thought she was a bitch when the movie was over.

“The Invisible” is just a bad movie, plain and simple. Even if you agree with the moral that “killing people is okay so long as you come from a broken home”, you still won’t like the movie because it’s poorly written, poorly acted, poorly edited and has an atrocious soundtrack.