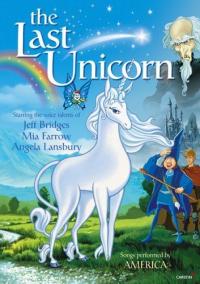 I feel a great sense of joy and satisfaction knowing that this film has finally been released on DVD. It’s a legendary piece of animation, a most beautifully and carefully crafted tale, and I am pleased to a towering degree now that this movie is widely available to a new generation of youths. Rankin-Bass delivered many animation classics in their time (The Hobbit, a Flight of Dragons), but the Last Unicorn may very well be their most memorable and most magnificent. It’s a movie every child should grow up watching, and a movie every adult should come to appreciate.

The story goes that in a land long ago, there once existed an immortal race of Unicorns. However, after untold ages, only a single Unicorn (Mia Farrow) seems to exist. She sets out to find her lost race, learning that they were driven away by a demonic Red Bull. Along the way she meets up with a bumbling magician named Schmendrick (Alan Arkin) and a kind-hearted and courageous middle-aged woman named Molly (Tammy Grimes). Together they discover that the Unicorns have been corralled to the lonely castle of King Haggard (Christopher Lee). The only way past the evil Red Bull is to turn the Unicorn into a woman. But once she has become mortal, a new array of emotions come to her and she falls for Haggard’s kind and gentle son, Prince Lir (Jeff Bridges). After learning what it’s like to be mortal, she might not want to go back.

The Last Unicorn is a masterpiece of animation, getting everything right. The animation was produced by Topcraft, a Japanese studio. So on a technical level, the animation has the smooth, detailed and fluid appearance of a Japanese cartoon but with a distinctly Western style and atmosphere. The background artwork is breath-taking, really drawing you into the world of the Last Unicorn. Topcraft is well-known for animating such films as “the Hobbit” and “Nausicaa of the Valley of the Wind”. Many of the talent from Topcraft went on to work for Studio Ghibli, so right there, you know that the animation team was nothing but the finest in possibly the whole world.

The voice acting is marvelous, with even the “token celebrities” delivering magnificent performances. Christopher Lee supposedly came to each recording session with his very own copy of the novel (by Peter S. Beagle), as he was a fan. Mia Farrow plays the Unicorn wonderfully, with a naive and stoic mystique. Jeff Bridges, Angela Lansbury and Alan Arkin all deliver exceptional performances, and I could spend pages complimenting each one. However, I feel the need to point out another fantastic performance from the late Brother Theodore, someone who has a voice you can never forget.

The songs in the movie were performed by America, and whether you like their music or not, you can’t deny that the songs are beautiful. Their theme is very moving, particularly as it plays over the ending credits accompanied by the full impact of the movie.

The story is a wonderful fantasy epic, if perhaps a bit predictable. Never-the-less, the derivative nature of the story hardly detracts from the film’s overall charm. As a matter of fact, like much of Rankin-Bass’ work, it is much more risk-taking than other animation produced for Western audiences at the time. Neither Walt Disney’s nor Don Bluth’s animated films of the time could invoke the emotion that the Last Unicorn’s beautifully tragic ending could.

The Last Unicorn is a classic piece of animation now widely available and affordable to all. I can’t think of any reason a person should go without seeing this movie.