The Chronicles of the Passion of the Lion King

Movie critics believe that their fandom gives them more credibility when reviewing a film. You know who I’m talking about: they always begin their paragraphs with “Before I begin, might I say that I am a huge fan of blah blah blah.” How does one define the enormity of fandom anyway? Perhaps a person is considered a huge fan after he’s memorized a particular movie’s source material word for word, enough to discuss it to the chagrin of his listener. And maybe he’s just a normal fan if he happened to see the book cover at Barnes and Noble and thought that it was quite pretty. As you can see (unless you are a moron), the lack of objectivity for determining fan status is a pretty good reason why you shouldn’t rely on it if you see a critic fall back on it during his review.

With that being said, might I say that I am an average fan of The Chronicles of Narnia: The Lion, The Witch, and The Wardrobe. I read the book at length in high school and even took a 20-question multiple choice test on it (and got a 97%). My friends talk about it a lot and how they love C.S. Lewis. I think I know my stuff. 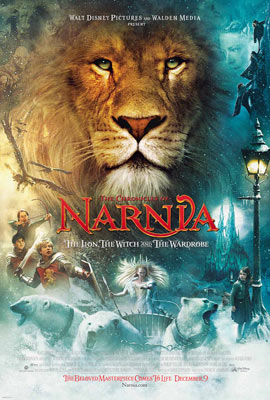 To the uninitiated, the question is, “what is this story about?” It would be misleading to say that it is strictly an epic fairy tale with your typical fare of mythical creatures and theme of good versus evil, the kind of story that a 23-year old should have outgrown by now (unless he is a ninja). The truth is that C.S. Lewis wrote the Chronicles of Narnia as a playground of fantasy with allusions to Christian themes. Contrary to what you have probably heard, it is not allegory. Lewis was an expert in allegory and stood firm to the fact that his tales were not allegorical. An allegory would be a literary device in which people and things are placeholders or representatives of something else. Lewis explains:

“If Aslan represented the immaterial Deity… he would be an allegorical figure. In reality however he is an invention giving an imaginary answer to the question, ‘What might Christ become like, if there really were a world like Narnia and He chose to be incarnate and die and rise again in that world as He actually has done in ours?’ This is not allegory at all.”

In other words, the plot of the Chronicles (particularly the afforementioned book) is essentially a fictional “what if?” that shows us a parallel world in which the same laws of Christian theology are applied. Aslan (the Lion) is not just a representation of Christ: he is Christ in the literal sense. Christ (the 2nd person of the Trinity) has, in Narnia, taken the form of a lion named Aslan.

Thus, any complaints by critics concerning the “Christian overtones” in the film are fruitless in that the entire plot revolves around a dynamically Christian universe: without that, the film cannot function and it would not be true to its source material.

But is it blatanly obvious?

Yes. The movie is quite true to its source and even adds emphasis to the death of Aslan. If you have ever seen The Passion of the Christ, then imagine the scourging of Christ except with a PG-rating and with a lion and stone table instead of a human and a cross. Aslan’s death and resurrection (oops, forgot to warn you about that: this review has spoilers) are blatantly obvious in their Christological connections regardless of whether or not you knew all that allegory stuff just mentioned. These are, thankfully, retained in the film.

Like Lord of the Rings, Narnia is a wild and beautiful digital landscape with half-naked man-horses and all your favorite fictional wildlife (including mermaids… take that, Peter Jackson). It has the fantastical symphony playing during all your favorite action scenes and all the swords, axes, and arrows that you’re just dying to see. It is not as awesome as LOTR in that everything has been toned down to fit snuggly into the PG rating, but it is more violent than you would probably expect from a PG movie. But the one thing Narnia has that LOTR does not is a chariot being pulled by polar bears. You heard me: polar bears. I do not know about you, but I think that is pretty hardcore.

The actors are all very much in their roles. Aslan is especially great as Liam Neeson, which gets pretty distracting at times. This is but a minor complaint when held up the movie’s most glaring problem: time and space. Time-wise, the movie flows at an uneven pace that is blatantly obvious during the film’s most important transitions. The film is strongest during its opening act, immersing the viewer into the world at war and these misplaced children’s strange situation. When Lucy opens the door to Narnia, it is a very fluid and sentimentally crafted scene. When the gang follows, however, we are not treated to an even bigger view of Narnia: Narnia is geographically a dull and boring (yet pretty) wasteland whose sole inhabitants seem to be an ice queen, her midget slave, a half-naked man-horse, 4 wolves, and 2 beavers. We jump from one place to another with no sense of time to pace each event. Even when the movie progresses to Liam Neeson’s camp, we are shown soldiers that act as nothing more than props being set up for the obligatory battle scene. Narnia seems less like the tangible, explorable world of Middle Earth and more like a children’s sandbox: one side is for the good guys and one side is for the bad guys. The end is probably the worst example of this problem of temporality, as the kids (shown to be old for all of 10 seconds) are suddenly ejected back into our world following a downplayed ceremony which was, for all purposes, supposed to be the fulfilling denouement of the movie.

It is a knee-jerk reaction to compare this film to Lord of the Rings and rightfully so: Peter Jackson took his sweet time with Tolkien’s work, whereas this film seems at times to not be fully complete. Still, it is a very rewarding and interesting holiday movie that the whole family can enjoy, especially because of the polar bear chariot.