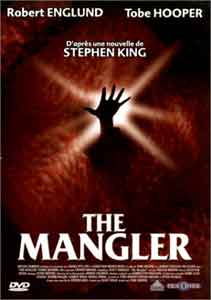 Three legends of the horror industry come together: Tobe Hooper (the Texas Chainsaw Massacre, Poltergeist), Robert Englund (a Nightmare on Elm Street) and Stephen King (Creepshow, It). So, does this combination result in success? No. No it does not.

The Blue Ribbon Laundry Company has a problem: its ancient laundry-press (affectionately referred to as “the Mangler”) keeps eating the employees. Hard-boiled detective, John Hunton, thinks something is up and investigates the laundry company, owned by the archaic and crippled Bill Gartley (Englund). Hunton’s best friend, Mark, is convinced that the Mangler is host to a demon, and you know what? He’s absolutely right. It seems in order to bring power and success to the wealthy members of the community, Gartley periodically feeds a 16 year old virgin to the Mangler. Well, the Mangler’s getting hungry and Gartley’s niece just happens to be at that tender young age.

You’d think a movie where people get crammed through a laundry press for 106 minutes would be a lot more exciting than this. Unfortunately, the talents involved with this film are squandered rather unashamedly. Englund delivers a memorable performance as Gartley, but it’s only memorable because it’s so bad. The role was way too over-the-top, and this is the guy who played Freddy Krueger I’m talking about. Tobe Hooper’s direction isn’t much at fault. There’s decent use of lighting and some wacky angles, but nothing, well…impressive about any of it. As far as Stephen King’s contribution to the film goes, I’ve never read the original short story in which this film was based, but I imagine and can’t be much worse than the movie.

The Mangler eventually comes to life to chase the heroes down a dimly lit hallway, realized in the best CGI 1995 had to offer. It’s worse than Reboot. Thankfully, Hooper saw it fit to spare the audience any direct images of the computer generated robot demon and I couldn’t be more grateful for that. The gore is all-present, though. It’s always pleasant to see people get pulped through a laundry press and you get plenty of that action. Old ladies, teenagers, hookers, doucebag foremen…no one is safe from the gaping maw of the Mangler. Well, actually, just about everyone in this movie is borderline-retarded, practically crawling inside a dangerous piece of machinery just because.

I honestly can’t fathom why in God’s name they made a *sequel* to this thing, but I’m not surprised it went straight to video. Anyhow, I suppose you should check this movie out if you’re a Stephen King completist or just looking for some bad horror flicks to make fun of with your friends. Otherwise, don’t waste your time. Maybe if the Mangler-monster at the end had been brought to life with traditional effects instead of caveman CGI I might have gotten a kick out of this film, but as it is, the whole thing is pretty awful.