The Matador is Full of Bull

As I type this, RottenTomatoes.com currently lists The Matador as having a freshness rating of 82%. This means that, of all the syndicated Internet movie reviews of The Matador out there, 82% of the critics found this movie to be above average (even good).

What are these people thinking? 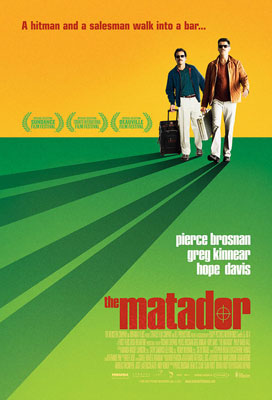 I had no idea what this movie was about prior to today. All I knew was that its trailer was constantly played for weeks during the Colbert Report and that there is scene where a car blows up. But I wish I did know, because it would have saved me $6.00 that could have gone to buying something worthwhile, like Ebola.

James Bond plays Julian, an aging hitman who likes to paint his toenails, drink, smoke, and fornicate. He is sent on a mission to Mexico where he has a fateful encounter with Danny (Greg Kinnear) in a hotel bar, hence the movie’s tagline “a hitman and a salesman walk into a bar…” Not so shabby, huh? I mean, any formula that has two character types (note that I didn’t say “people”) meeting in a bar is, at least, an intriguing potential for a plot. Hey, it works for jokes. Just look at the comedic pairing of a mob boss and a psychologist in Analyze This.

But that’s where the fun ends. Outside of the first ten minutes of spontaneous humor coming from both Bond and Kinnear, the film becomes a tedious, meticulously paced borefest that doesn’t leave you caring one way or the other for either men. So what if Bond is having the assassin’s equivalent of erectile dysfunction? It’s 50 minutes into the movie and we’ve only seen him truly kill one guy. The rest of the time, he just acts weird and sees sharks when he jumps into the hotel pool. “Well,” you might say, “it’s not about the visuals, but about the dialogue and characterization of the two characters.” What characterization? There is no believability in Kinnear befriending a man who just trivialized the death of his son and made a homosexual comment regarding what goes good with a margarita. Nor is there believability in the “good friend” who just happens to accept Julian as he is, refuses to help him kill a man, then helps him kill a man at the end. What gives? The movie does not even succeed in doing what its praisers say it does: using dark humor. Say what? Any humor that the movie achieves is done solely through the awkardness of dialogue and the occasional glimpse at Julian’s neurotic episodes. And unfortunately, these neurotic episodes are actually part of the plot progression: you get those messed up, and your plot goes with it. Take, for example, Julian seeing himself as a little boy every time he’s about to kill a target. Sure, that’s funny. But what about the times when, as Julian is looking through the sights, he zooms in real quick on himself having what appears to be a seizure or nervous breakdown? This isn’t dark humor nor visually appealing. It’s just not funny nor practical. It falls incredibly flat. And it is this flatness that permeates the whole movie. If the director wanted to go for dark humor, he should have taken pointers from Very Bad Things.

The movie gives a lot of effort to its musical direction and visual weight, but those things just can’t save The Matador from the rest of the bull.