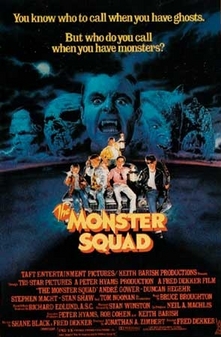 While everyone was busy ranting and raving about Steven Spielberg’s heart-warming family film, “the Goonies”, all the cool kids knew the Monster Squad was where it’s at. While generally looked at as a kid’s movie, this flick is incredibly violent and crass to carry such a label. The cast may be predominantly young, but the humor and action skews toward an audience more mature than the Goonies.

After sleeping for 100 years, Count Dracula has risen from his coffin once again. Dracula needs an ancient amulet with which he can usher in a new age of darkness. To aid him in his quest are Frankenstein, the Mummy, the Wolfman and the Gillman. The only ones standing in his way are the Monster Squad, a team of 5 pre-teen horror movie junkies. The members of the Monster Squad are the only ones aware of Dracula’s evil plans and in their possession is a diary containing an ancient incantation to seal Dracula away in total darkness for all eternity. The only catch is they need Dracula’s mystical amulet to complete the ritual, and Dracula won’t give it up without a fight.

The movie is unashamedly a “rip-off” of the Goonies, what with it containing the tough kid that looks like Corey Haim, the mandatory fat kid and the kid-friendly Frankenstein who bears a more than passing resemblance to Sloth. Yet I liked this movie a lot more than the Goonies. For one thing, I totally dug the All-Star cast of classic Universal movie monsters. You get every monster in one flick forming a sort of super villainous Legion of Doom. All the monsters get a healthy dose of screentime, save for the Gillman who’s reduced to a bit of a do-nothing. On the bright side, he looks a lot like the Predator.

I mentioned earlier, but this movie is really violent. Monsters get dismembered, staked through the chest, teenage girls are drained of blood, people and monsters get shot…the works. There’s lots of gruesome imagery, too, and some rather scary monster designs. This’ll definitely frighten some of the younger set. I’d still say it’s a good movie for kids, just gauge what kind of media your kids can handle. If they can take scary movies then they’ll really enjoy the Monster Squad.

The Monster Squad is a campy, violent flick, but it’s also incredibly funny. The cast of tweens really betray the quality of the humor in the movie. They say some really terrible things. There’s also quite a bit of…um…”off-color” language which your kids might pick up, just as a warning.

This is a great movie; hilarious, violent and packed with all the best monsters.