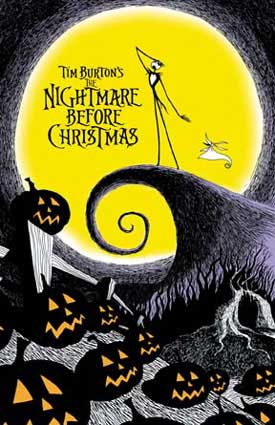 Skeleton Jack, the Pumpkin King, is adored by fans all over Halloween Town. However, Jack feels empty inside, longing for something more. While wandering depressed through the woods, Jack stumbles upon the nexus-point of the holiday worlds. Quite by accident, Jack winds-up in Christmas Town and is amazed at the sights and sounds of the holiday. He returns to Halloween Town, determined to bring Christmas to the world in his own special way. However, Sally, a ragdoll created by the mad Dr. Finklestein, has a vision of Jack’s Christmas going terribly wrong. Jack cannot be reasoned with, unfortunately, and sends three trick-or-treaters, Lock, Shock & Barrel, to kidnap “Santy Claws” from Christmas Town so he can relax during this year’s Christmas. However, the trio delivers Santa to Oogie Boogie, the Boogeyman, leaving Santa in great peril.

The Nightmare Before Christmas is a work of art. It takes the classic Rankin-Bass stop-motion holiday films from the 70’s and warps them in a way only Tim Burton knows how. The imagery is dark and ghoulish, like it stepped right out of Beetlejuice, yet beneath all the monsters and grim settings is an innocent sense of humor which keeps things from getting too scary. It’s a great family film, with a sense of wonder and imagination that will appeal to children, and animation and direction that’ll suck in adults as well.

The musical numbers are orchestrated by, take a guess: Danny Elfman. If it’s a Tim Burton flick the music will *always* be done by Elfman. And he does a marvelous job with the Nightmare Before Christmas, creating some of the most memorable and beautiful musical sequences I’ve ever heard. Additionally, all of Jack’s songs are sung by Elfman-himself. I never knew the guy could sing, too. The music melds with Henry Selick’s direction perfectly, making just about every moment a memorable one. My favorite song is the Halloween Town theme from the very beginning. Gotta love that bit with the monster hiding under my bed, ready to rip me to pieces at a moment’s notice.

I, personally, prefer to watch the Nightmare Before Christmas as a Halloween movie, as the imagery is just so dark and spooky, even during the Christmas segments, that it just oozes “Halloween” from start to finish. Still, it’s perfect for both holidays, and you can never have too many excuses to watch this movie.

In a day and age when every animated feature film has to be CG-animated, the Nightmare Before Christmas is something wonderfully different. It’s scary, it’s moving, it’s beautiful…it’s perfect. It’d be a crime not to give this film an A. A decade later it received a sequel in spirit, called the Corpse Bride, which is also worth checking out.