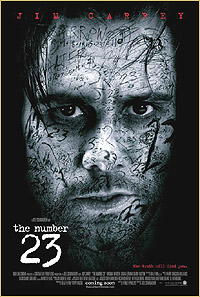 I had my reservations going into this film. I mean, the previews didn’t make it look especially bad, and both Joel Schumacher and Jim Carrey have proven their talents in recent years, practically atoning for the sin that was “Batman Forever”. However, it just didn’t interest me all that much. Well, I can say with general ease that “the Number 23” is a pretty good film. Not a great film, or an award-worthy film, or even something that should grace any sort of Top Ten list, but a “pretty good” film nevertheless.

Walter Sparrow (Jim Carrey) is your typical father/husband/dog-catcher, nothing to see here. However, his life changes when his wife (Virginia Madsen) buys him a fascinating book she was flipping through entitled “the Number 23”. The novel deals with a detective named Fingerling (also played by Carrey) who is drawn into a bizarre case where every lead ends with the number 23. Sparrow begins to notice eerie similarities between the character of Fingerling and himself, and when he starts to do the math, discovers that every significant thing in his life can be boiled down to the number 23. The number quickly becomes an obsession which tears his family apart, as Sparrow agonizes over the true identity of the book’s author and whether he will share a fate similar to Fingerling’s.

I had a hard time getting into the film when it started. The idea that a “normal” person could violently obsess over something as trivial as a number strained even my suspension of disbelief. Yet as wacky as things got, I never found myself losing interest. “The Number 23” is a mystery suspense film, however I felt it took a bit too long to get to the mystery part. The entire movie isn’t about Carrey trying to find the author; that kicks in about halfway through. The first half is mostly Carrey losing his mind over a silly little number, which is the half of the film I found most tedious.

The second half is where your patience really pays off. Like all good mystery movies, there’s a shocking plot twist and crazy revelation which you never saw coming yet it makes about half-sense when you put the pieces together. I suppose what made the whole side story of “this obsession is tearing our family apart!” a bit less text book is that Sparrow’s son (Logan Lerman) gets into it as well, so you aren’t left feeling like Sparrow is completely isolated in his dementia. Still, the big revelation at the finale, as interesting as it was, was still bogged down with some soap opera-quality BS that the audience couldn’t have predicted because there were never any hints in its direction. Which, in turn, delivers a minor injury to the “mystery” aspect, as a good mystery film should always make it possible for the audience to figure it out on their own if they’re smart/attentive enough.

Scenes from the book-within-the-movie are played out in a film noir style (this is a detective novel, after all). I found these parts to be least appealing, as Schumacher bastes them with a thick and obvious “Weee! Look at how hip and rock n’ roll I am!” that can make your stomach turn. Its one thing to try and be “cool”, its another to lay on it on so thick the audience snickers at your filmmaking techniques (I’m looking at you, Tarintino).

Save for a few things that didn’t gel with my personal tastes, there really wasn’t anything all that wrong with “the Number 23”. The aforementioned “man, a guy going nuts over a number is just stupid” complaint is a bit moot, as the film’s climax explains all. Honestly, it’s a pretty good movie. I mean, it’s not going to top any charts as far as mystery flicks go, but its pretty solid. Certainly worth a look in the theater during a month that’s been pretty cruddy, movie-wise.