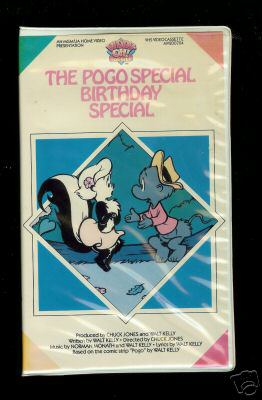 There’s a chance a lot of you aren’t acquainted with Walt Kelly’s landmark comic series, Pogo the Possum. It has fallen out of the spotlight in recent years, but back in the day it was one of the most popular comics around and one of the earliest to pioneer what’s referred to as “graphic novels” today. Kelly’s influence can even be felt in more contemporary comic books, such as Jeff Smith’s epic series “Bone”. It’s always disappointed me to a small degree that a comic which could lend itself to animation so well has only ever received one cartoon special, and it was nearly forty years ago, at that. Never-the-less, the one animated television special we did receive was remarkably fun and captured the spirit of Walt Kelly’s creations just perfectly.

It’s the Fourth of July at Okefenokee Swamp, and Pogo (June Foray) and friends are ready to celebrate. Or is it Arbor Day? Or Valentine’s Day? Or…Christmas? No one’s really sure; all they know is they want to celebrate a holiday, any holiday. The surly Porky Pine (Chuck Jones) believes it to be Valentine’s Day and tries to express his love to the ravishing Miss Mamselle Hepzibah (June Foray), but she seems to have eyes only for Pogo. Wishing to help his chronically depressed buddy (who also happens to be an orphan), Pogo and friends put together a birthday party in his honor. Of course, Porky misunderstands, leading to an even deeper depression.

Back in the late 60’s and early 70’s, Chuck Jones seemed to lend his talents almost exclusively to adaptations. It was around this period that he gave us “How the Grinch Stole Christmas”, “The Bear that Wasn’t a Bear at all”, “The Phantom Tollbooth” and, you guessed it, “The Pogo Special Birthday Special”. Jones’ work in this period was very experimental, but his Pogo short seemed to reign in the acid-tripping surrealism a bit, thankfully. Written by creator Walt Kelly, this television special manages to capture most of the charm of the comic and features nearly the entire cast, if only in cameo appearances for some.

Jones’ style of humor is ever-present and fits these characters like a glove. There’s a lot of “fourth wall” gags in the flick which tended to be the funniest. For instance, when a character zooms off into the distance, leaving behind a sound effect in writing, the remaining characters would read it aloud and question its meaning, thoughtfully. Trust me, it’s funnier in action. When the characters aren’t doing any real gags, the charm of the strip and Kelly’s writing really shine through. One thing that made the comics so fun was how the cast would talk in a deep southern dialect of mismatched and misunderstood words and phrases, which is as fun to listen to as it is to read.

The cast for the film was just about perfect. I never knew Chuck Jones actually got behind the mike to do any voice acting, but he plays the depressed and disgruntled Porky Pine without missing a beat. Porky seems to be the real star of the show, with even the title character kind of falling out of the picture as Porky laments over his own short-comings. June Foray, easily the most prolific and accomplished female voice actor in animation history, hits Hepzibah square in the bullseye. In the comic, Hepzibah had this bizarre manner or speaking, where she would combine French and English into the most perplexing and at times incomprehensible sentences. A challenge, to say the least, but Foray totally nails it. Foray also plays Pogo, though she wouldn’t have been my first choice. She’s quite good in the role, but I never really read Pogo as having such a feminine voice. Les Tremayne also comes in strong as Churchy LeFemme, the singing turtle gondolier, while creator Walt Kelly proves he has a voice made for cartoons in addition to his brain, as he voices Howland Owl, Albert and others.

I suppose the one thing absent from this television special that was all-present in the comics is the political commentary. Pogo was never shy about drawing attention to subjects such as environmentalism and the complexities of presidential elections. While “The Pogo Special Birthday Special” is a fun celebration of holidays and a very cute tale, it lacks the depth of the comic series. And that’s one reason why I always wanted more Pogo cartoons. The characters were born for animation and there’s more than enough story there to round out a well-produced cartoon series.

Anyhow, to date, “the Pogo Special Birthday Special” has not been released on DVD and the VHS tape has been out of print for decades. It can be rather hard to come by, but it’s definitely a must for any fan of Pogo or Chuck Jones animation in general.