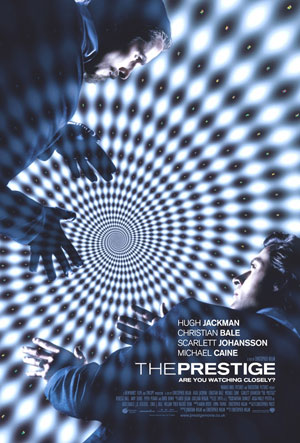 Batman vs. Wolverine? Awesome. I wasn’t sure what to expect when I went into this movie. I mostly went at the behest of my brother, who wanted to see it quite badly, telling me the fellas over at IMDB were rating it exceptionally well. Well, I have to say, I was pleasantly surprised with this film. Certainly Oscar-worthy material, without a doubt.

Rupert (Hugh Jackman) and Alfred (Christian Bale) are both up-and-coming magicians working for a showman named Cutter (Michael Cane). However, the difference between the two is that Rupert likes to keep things traditional, afraid to get his hands dirty, while Alfred thinks the magician-gig is stagnating, in desperate need of new material. After a mishap during one show, Alfred inadvertently causes the death of Rupert’s wife. And so begins a heated and ugly rivalry which goes on for years. Both magicians are constantly out to one-up each other, and at times, kill each other. It all leads to the enigma of the greatest trick in the business, “the Transporting Man”, though the truth behind the trick may be too horrible to imagine.

The Prestige, the movie, is in many ways like the illusionists it features; keeping certain things just out of sight yet within the audience’s grasp at all times if only they can manage to figure it out. The movie is set-up in a rather non-linear fashion for the most part. Christian Bale’s character is delivering a narrative from the journal of Hugh Jackman’s character, while simultaneously, Hugh Jackman is delivering a narrative from the journal of Christian Bale’s character. Each character gradually drops a piece of the puzzle in place, all leading up to a very shocking ending. This back-and-forth style of story-telling can be a bit confusing at first, and unless you’re paying attention, there’s a chance the audience might get lost. I wouldn’t recommend getting up and going to the bathroom during any part of this movie.

The lead characters are both very troubled, bitter-sweet people. There is no clear “good guy” or “bad guy” as they both do horrible things in the pursuit of their trade and their rivalry. Bale and Jackman are fantastic in the roles; Bale can get so smug-looking at times you just want to deck him in eye.

Then there is the best part of the movie, the part everyone leaving the theater is talking about: the twist. Although I managed to figure it out well before my brother, I was only able to do so because I had seen a cartoon on “Oh Canada” some many years before which had a similar plot. However, my ability to deduce the plot did not diminish its impressive power. It’s difficult to see coming, and even after you think you’ve figured it out, they’ll throw a few more curves at you.

The Prestige is one of those films you see in the theater and walk out knowing it’s going to win an Oscar. Everything necessary to earn an Academy Award is there: the acting, the direction, the script…everything. I have to give it an A. Do yourself a favor and see this movie. Then, do everyone else a favor and *don’t* spoil the ending. Please.