No Punishment for The Punisher

Children of the 90’s may not have grown up with cinematic anti-heroes, but their presence is still felt in the vernacular. When you’re about go nuts on someone, you say that you’re going to go all Rambo on them. And Eye of the Tiger is still the universal theme song of the underdog who’s about to whoop someone. And hey, we even elected The Terminator as the governor of California. There is something to be said about our Charles Bronsons and Chuck Norrises who have defined the manly-man of the 1980’s. They are sort of like the boogiemen of cinema who punish evildoers in a world that is clearly black and white, and we praise them unashamedly. 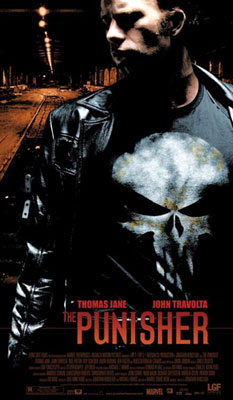 We do not have a 90’s equivalent of that, so leave it up to director Jonathan Hensleigh and actor Thomas Jane to give us a whole new gun-toting vigilante for the 21st century.

The Punisher delivers. Plain and simple, the movie is a straight-up revenge tale that is not sugarcoated in CG effects, memorable fight scenes, or even a funky techno beat. No: The Punisher is a raw and gritty tale of one man’s war against those who murdered his family. It is not wrapped up with a pretty bow but rather a washed-out skull. Like an obituary, this is the type of film that does not leave a memorable impression but a morbid awareness.

Frank Castle (Thomas Jane) is an FBI agent who happens to kill the son of mob boss Howard Saint (John Travolta) on his last assignment. While at a family reunion, Castle’s entire family is slaughtered in a mob hit conducted by Saint’s men. Castle is left for dead but survives, only to return to Tampa to payback the Saints for what they did to his family.

Again, the movie is devoid of any real moral dilemma outside of the rhetorical question of how far a man can be pushed before he goes off the deep end and ruthlessly takes down his aggressors. It is a black and white issue: either you would cross the line, or you would not. Frank Castle definitely crosses the line and for the next two hours, we feel it too. It never justifies his actions or gives him the right, but it does follow him behind the shoulder to give you a feel of what it’s like to be a man so absorbed with justice that he would extend it to everyone outside those responsible for his family’s death. Thomas Jane is a perfect choice for Frank Castle, a deep-voiced stoic who delivers grim one-liners and whose gaze betrays a man driven to the edge. John Travolta takes a backseat as Howard Saint and is your run-of-the-mill villain who is just waiting to be offed at the end. Everyone else is just cannon fodder.

The movie succeeds in its apparent mediocrity but ends up feeling as if it has taken a banal plot and turned it into a paradigm of how revenge movies should be. Does it advocate violence? Not directly, though it gives us the guilty pleasure of following a man’s quest for immoral retribution. In its good guy versus bad guys return to basics, The Punisher has definitely given us an anti-hero for our day and age.