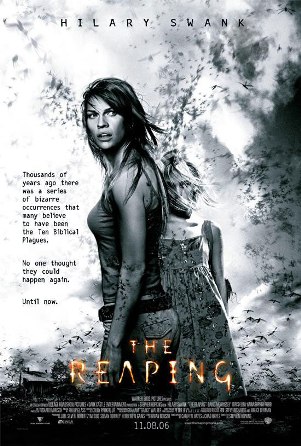 It has been my personal “tradition” for the past ten years to go on a horror movie marathon during Halloween week. My film lineup is very eclectic – ranging from horror classics, Asian horror movies, a few B movies, some European horror movies (go Fulci and Argento!) and some of the newer Hollywood horror fare.

It was with great anticipation then that I popped the DVD of The Reaping on my home theater. This is two-time Oscar winner Hilary Swank’s first foray into the horror genre (not counting the horror that was The Next Karate Kid). Swank is determined to go mainstream and not just be recognized by the art house crowd, thus her acceptance of The Reaping. Even though I was looking forward to the movie, her previous mainstream effort, The Core, still left a bad taste in the mouth so I approached it with cautious enthusiasm.

And I was absolutely right. The Reaping is a wholly uneven film that left almost all of the horror elements to cheap shocks and surprises. Swank plays a college professor who debunks so called miracles. But she was also a former missionary and ordained minister who lost her faith in God when her family was murdered while they were doing missionary work in Sudan. Swank investigates the unmistakable appearance of the Biblical ten plagues in a small town in the Bible Belt and uncovers a much darker mystery involving a golden haired little girl and Satan worshippers.

The premise of the movie is quite intriguing on paper. You have the elements of a wonderful psychologically driven horror movie that also delves into religion and faith. But the failure comes in the execution. First, the script was a meandering mess. Carey and Chad Hayes, who wrote the screenplay from a story by Brian Rousso, failed to rein in the script. The movie came out of the gate strong, establishing a wonderful sense of foreboding with Stephen Rea’s first scene and the subsequent scene in Chile with Swank and a wonderful Idris Elba (as the colleague/assistant). But everything went downhill from there. The Stephen Rea scene was discarded all too quickly and the two other times he appears onscreen felt more like an aside than integral scenes to propel the movie to its conclusion.

Director Stephen Hopkins, who helmed the well-made The Ghost and The Darkness, could be the second factor that made this movie a fine mess. Whereas Hopkins showed how a great storyteller he can be with The Ghost and The Darkness, in The Reaping his weaknesses are all too apparent. He is obviously confused as to which direction he wants to take the movie. His confusion extends to how he directed his actors, too. Child actress Annasophia Robb appears as a very menacing child in practically all of the movie but turns angelic during the denouement only because her real nature was revealed. Consistency has fallen by the wayside here.

The CGI effects also made the movie more of a visual spectacle than a disturbing horror film. The effects were overly done that you’d think that Michael Bay was directing the movie during the climax. Not even two very intriguing twists could save the whole movie from being a disappointment. The Reaping is glaring example of the deficiencies of the American horror genre.