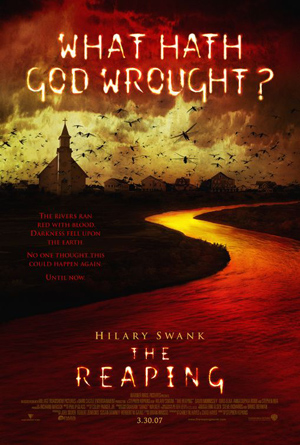 Although the trailers came across as a bit iffy, I felt that the concept of “the Reaping” showed a lot of promise. I didn’t go into the film with all sorts of false hopes and high expectations, but I did give it the benefit of the doubt; something I can’t say many other people in my city did, considering the relatively empty theater I saw it in. Now that I’ve seen the flick, I have to confess, “the Reaping” is pretty mediocre.

Katherine Winter (Hilary Swank) is a former minister who turned her back on God after the death of her family and now devotes her life to traveling the world and proving reported miracles as false (not petty at all). She is approached by Doug (David Morrissey) of the backwater Louisiana town of Haven who has a startling claim: the swamp in Haven has turned completely to blood. Accompanied by her partner, Ben (Idris Elba), Katherine arrives at Haven only to encounter a series of biblical plagues, each with completely unexplainable origins. At the epicenter of the plagues is a little girl (AnnaSophia Robb) who may or may not be the Anti-Christ.

I found the idea behind “the Reaping” to be very intriguing: the ten biblical plagues tormenting a small town in the Bible Belt. Unfortunately, what could have been a fascinating story turned into just another generic Hollywood horror flick, filled with mundane jump-scares, over-the-top special effects and needless explosions. Sometimes less is more, ya know. “The Reaping” left me wishing it had been made in the 70’s or early 80’s where a lack of budget and special effects might have left it to rely more on a strong script exploring the mystery behind the bizarre plagues rather than jillions of CGI locusts and a ridiculously effects-heavy ending. One day I’ll finish that time machine and make my dream a reality. One day…

There are some upsides to this film, though. The cast is quite strong and they all play their parts convincingly. The characters can be a bit “blech” thanks to moments of convenient and awkward exposition, but the actors do the best with what they have. While I’m not normally a fan of child actors and actresses, AnnaSophia Robb has been impressing me lately with movies such as “Charlie and the Chocolate Factory” and “the Bridge to Terabithia”. She looks to have a very bright future ahead of her. In regards to “the Reaping”, while it’s not that great of a movie, she plays the part of the creepy little girl rather well.

There just isn’t much for me to say about “the Reaping” because it just isn’t much of a movie. It takes a potentially interesting concept and turns it into a string of clichés. You’re better off seeing “Grindhouse” this weekend and waiting for “the Reaping” to hit cable. You’re really not missing anything.