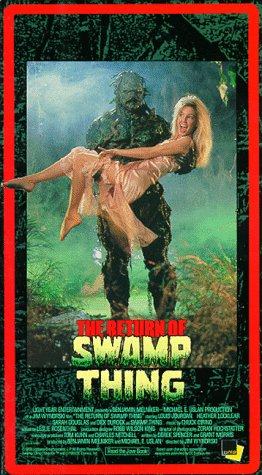 There’s a big division amongst the Swamp Thing fanbase as to which film they prefer, the original or the sequel (that would be this movie, right here). On a personal note, I prefer the Return of Swamp Thing over the first attempt. While it is most-definitely a more tongue-in-cheek dark comedy, it has better special effects and the self-referential humor makes it more amusing than the original, which was just a hands-down bad movie which tried to take itself too seriously.

Following-up on the events of the last installment, Dr. Alec Holland-turned-Swamp Thing is lurking in the Louisiana swamps, protecting the innocent but lamenting in his solitude. The evil Anton Arcane (Louis Jourdan) has apparently survived the events of the previous film and seeks revenge on Swamp Thing. He invites his niece, Abigail (Heather Locklear), who has a creepy love of plants, to come visit him, as he has various nefarious plans for her. Swamp Thing rescues Abby from the clutches of Arcane and the two develop a budding romance (see that? That was a pun). Arcane won’t yet admit defeat, and he unleashes his freakish Un-men on the Louisiana swamplands.

I have a soft spot for this movie, as it’s what got me into Swamp Thing when I was a lad. This movie is an improvement over the original in nearly every category, from directing to special effects to overall fun. Swamp Thing’s costume is considerably more detailed than it was in the original and hardly as embarrassing in broad daylight as that green latex pile of crap from the first film. Swamp Thing looks very soggy and very…swampy. Dick Durock’s skill at playing the character finally shines in this film, as he has a better costume to work with. During the 80’s and early 90’s, he was Swamp Thing. The live action TV series on USA helped. The costumes for the Un-Men are, well, “Power Rangers”-quality, at least when seen in a bright room. The leech-monster looks good-enough, and his fight with Swamp Thing is enjoyable.

The film never takes itself seriously, with lots of self-referential humor that pokes fun at the ridiculous-nature (another pun!) of the story. The only bit of “humor” that irked me were the two kids that showed up through-out the movie making stupid one-liners and observations. They were very annoying, though the scene where they watch music videos on Mtv takes me back to the good ole days.

I also feel obligated to mention that the beginning of Return of Swamp Thing is one of my favorite opening sequences from any comic book movie. It starts out with a bunch of hunters in the swamp getting picked-off one-by-one by that leech monster, Swamp Thing coming to their rescue, then helping the nerdy hunter find his glasses and introducing himself; “They call me…Swamp Thing”. It’s then followed up the opening credits done to a montage of art from the comic combined with my *favorite* Creedance Clearwater Revival song, “Born on the Bayou”. Man, do I love that opening; it’s my favorite part of the movie.

Now, for the fans of the comic, I will say that the sequel is a *bit* truer to the source material then the first film; tongue-in-cheek atmosphere not-withstanding. Heather Locklear doesn’t play a very good Abigail Arcane, as Abby was anything but a dimwitted bimbo in the comics. Still, she serves as a much better (and more accurate) love-interest for Swampy than “Alice Cable” from the first film. Incidentally, the character Alice Cable was based off of, Matt Cable, was married to Abigail for a little while in the comic. Weird. Return of Swamp Thing was made in 1989, after the Alan Moore era of the comic, so a few of his influences creep in there (though they’re intensely watered-down). Swamp Thing can now survive bodily destruction, just like in the comic, and can “teleport”…sorta. In the movie, he reduces himself to a puddle of algae and travels through sewer systems before reconstructing his body. It’s much simpler than in the comic, but the visuals are rather good.

The Return of Swamp Thing won’t please everyone, but it does have its moments and it’s a MUCH better Swamp Thing film than the last movie. I’d give it a C+.