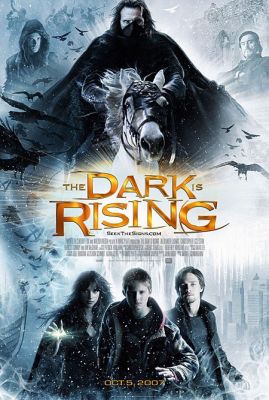 Based on a children’s book I’ve never heard of, “The Seeker” is a pretty formulaic PG-rated fantasy flick, but aren’t they all? Predictable (and at times, trite) though it may have been, it was certainly a fun venture that’s sure to please the Harry Potter-hungry tykes during the downtime between sequels. I actually found it to be far less childish and goofy than the trailers made it out to be, which was a pleasant surprise to say the least. Although “The Seeker” isn’t a masterpiece, it’s a good movie to take your kids to and one you parents might enjoy a little, as well.

Will Stanton (Alexander Ludwig) is your average everyday ordinary by-the-books not special whatsoever nothing amazing could ever possibly happen to him no seriously he’s totally normal fourteen year-old kid. Then one day a legion of mystical guardians called the Old Ones (not to be confused with the Lovecraftian Old Ones, who drive people insane) inform him that he is the Seeker, a warrior of the Light entrusted to gather all seven magical signs before the Dark destroys the world. Guess he wasn’t so ordinary after all. Will isn’t so hot on the idea of being responsible for the welfare of the Earth, but he doesn’t have much time to mull it over, as the Rider (Christopher Eccleston) is determined to destroy Will and usher in the Dark, leaving Will with only five days to get the job done.

Yeah, it doesn’t get more formulaic than “Light vs. Dark”, but at the end of the day this is a kid’s movie, so just because we 20-somethings have seen a jillion movies and TV shows that extol the virtues of light and the evils of dark doesn’t mean every 9 year-old has. While the story itself is fairly cut and dry, Director David L. Cunningham manages to inject some life into it with some very colorful and at times, somewhat frightening cinematography. The scene where Will is being interrogated by the evil mall security guards is particularly well done. While I wouldn’t go so far as to say this is a scary movie by children’s standards, it can get pretty intense. Walden Media also throws there hand in, providing their usual top-notch special effects. “The Seeker” isn’t as heavy with digital effects as some of their other projects, like “Lord of the Rings”, but what they do provide is up to their typical standard of excellence.

There are good and bad things about the presentation of the plot. While it basically reduces down to an “item collect” storyline, they manage to pull it off better than I expected. What I had anticipated was Will quickly gathering all the signs in rapid succession near the end of the flick as time ran out, but they actually managed to spread out his discovery of each sign at a consistent and steady pace that worked with the other plotlines running throughout the movie. As for the bad, “The Seeker” falls back on a few blatant clichés. For instance, they introduce a hooded mystery villain halfway through the film, but their identity is obvious from the start since there’s really only one suspect. And of course, when the villain is unmasked they play it off as some grand revelation when even the seven year-olds in my audience saw it coming an hour beforehand.

Is “The Seeker” a bad movie? Nah, not really. Is it a predictable but entertaining kid’s flick? Yeah, that’s probably the better description. I think to really enjoy the movie you have to be in the target audience, but as far as flicks aimed at kids go, it treats its audience with far more respect than most of the competition (not a single fart or burp gag in the whole flick).