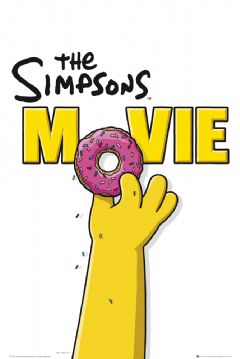 I was born in 1985. The Simpsons began in 1989. I qualify for what’s commonly referred to as “the Simpsons Generation”: an entire generation of people who don’t know life without the Simpsons. So needless to say, America’s most dysfunctional family has been a major part of my life since I could first think coherently. I mean, when you’ve spent every Sunday of your lifetime (and for a brief period, Thursday) watching a specific television series, to the point where you revolve your day’s schedule around that show, you can’t help but hold a certain sentimental attachment to it. The Simpsons doesn’t just mean a lot to me, it means a lot to millions of other people, regardless of whether the show has been very good in recent years or not. “The Simpsons Movie” is like a Simpsons smorgasbord, featuring everything fans know and love about the series in a handy two hour package.

Homer Simpson (Dan Castellaneta) has screwed up again. Big time. The EPA has sealed the entire city of Springfield off within a giant dome and its insane leader, Russ Cargill (Albert Brooks), has designs to nuke the city off the map. The Simpson family escapes the dome to start a new life in Alaska, however, Marge (Julie Kavner) has second thoughts and the family returns to Springfield to save the day. During all this, Lisa (Yeardley Smith) falls in love with the perfect boy, Bart (Nancy Cartwright) is tempted to spend more time with Ned Flanders (Harry Shearer) and Krusty, Mr. Burns, Bumblebee Man, Comic Book Guy, Cletus and all the rest do their thing.

I suppose the main problem with the Simpsons is that they’ve been around for seventeen seasons and produced over four hundred episodes. You can only tell so many wacky adventures about a family until, well, the formula starts to get stale. As South Park put it, the Simpsons have done everything. So with that in mind, there isn’t much they could do with this movie that you haven’t seen in some capacity in the television series. In the end, “the Simpsons Movie” doesn’t feel quite as special as it should and more like you’re watching a longer episode of the television series on a bigger screen with higher production values. But if you’re a fan of the Simpsons, well, that’s just fine.

While the standard Simpsons formula is ever present, the writing and gag-timing for the film are noticeably superior to what we’ve been seeing in the TV show for the past few forgettable seasons. The trailers only managed to highlight some of the lesser jokes, so I wouldn’t rate the entire film’s quality on what you saw in a thirty second promotional clip. I was laughing my ass off for nearly the entire length of the movie and it had my gut busting like it was 1994 again. This is the Simpsons I remember. A lot of the jokes rely greatly on one’s knowledge of the Simpsons, which is virtually a religion here in America. As someone who grew up with the family, knowing everything about every member of Springfield is just second nature to me, but I’ve come to realize in recent years that there are people who don’t watch the Simpsons and possibly never have. They, of course, are likely not to enjoy the movie as they can’t appreciate the sophistication of Bumblebee Man screaming “Aye chihuaha!”

“The Simpsons Movie” has a couple faults in the script department, I must admit. Some of the subplots for the characters seem rather superfluous and unnecessary. Lisa’s comes across as the worst; her romance with Colin being utterly pointless. Bart’s crossing over to the Flanders side of life, while somewhat important in regards to developing his relationship with Homer, feels rather redundant considering it’s been done in the TV series pretty frequently (see the episode where the Flanders adopt Bart, Lisa and Maggy or the episode where Bart stops loving Homer after he leaves him stranded at soccer practice). Probably the horse which has been beaten the most would be Homer and Marge having marital problems. You can only watch them threaten to break up so many times before you stop caring all together.

And yet, these overdone formulaic story elements are cleanly swept under the rug by all the quality gags that hit you at a breakneck pace. The movie is two hours long, but by the time the credits roll you’ll swear it was only half an hour. The gratuitous celebrity cameos which have been a part of the Simpsons for years are thankfully kept to a minimum. The few we do get are actually handled quite well and lend themselves to several good jokes. There’s some political commentary in there about the Bush Administration, and while that’ll probably make your eyes roll, just remember, the Simpsons have always had political commentary in their show. It just seems natural when they do it. There are a few surprisingly vulgar gags in the movie which you’d never see on the small screen. I know the show is meant for a young adult crowd, but no matter how you slice it, the Simpsons will always attract kids. And while the jokes were funny, they seemed glaringly out of place.

Well, it was a long time coming and while I can’t claim “this is the Simpsons movie you’ve waited seventeen years for”, I can say with certainty that it was good fun. The Simpsons fan in me never stopped smiling and the crowd I was with adored the heck out of it. A shame it took so long to get here, though.

For another look at the movie, check out Michael’s review at our sibling site Forever Geek.