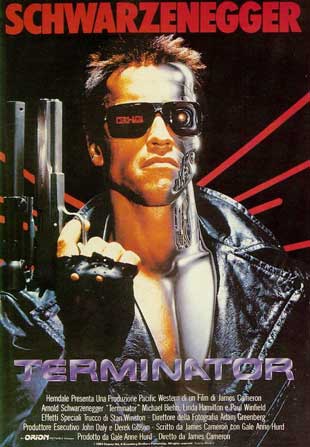 Ah, the Terminator. I knew I was bound to review this movie sooner or later, preferably before I review crappy knock-offs like R.O.T.O.R (which tried to fuse the Terminator and Robocop in some sort of unholy union). The Terminator is one of those films where I have a hard time choosing between the original or the sequel in regards to my favorite. It’s the same with Alien/Aliens, Star Wars/Empire Strikes Back or Raiders of the Lost Ark/Last Crusade. The original Terminator is more low-key than its later installments and is more along the lines of a horror film. While I won’t deny that Arnold Schwarzenegger plays a great stoic hero character in Terminator 2 and Terminator 3, there’s just something about him in this movie that’s simply…frightening.

I probably shouldn’t even bother writing a plot summary. I mean, honestly, who hasn’t seen the Terminator? Still, I might as well err on the side of caution. In the year 2029, super-intelligent robots have taken over the planet. Machines called “Terminators”, which can mimic human appearances and mannerisms, infiltrate human military cells and are gradually wiping out the human race. The leader of the human resistance movement is John Conner, who successfully heads a strike that cripples the machine forces. Out of desperation, the machines send a Terminator (Arnold Schwarzenegger) back in time to the year 1984 to exterminate Sarah Conner (Linda Hamilton), John’s mother, and successfully keep their greatest threat from ever existing. A soldier named Kyle Reese (Michael Biehn) follows the Terminator back in time to protect Sarah Conner at all costs.

Director James Cameron has a seriously kickass imagination; this movie is pure genius. From the grand scope, to the inspired story, to the menacing endoskeleton designs; the Terminator is just brilliant. Still, what really makes the Terminator is Arnold as the title villain. While he plays a great hero in the sequels, he plays an equally terrifying villain in the original. His overall size and emotionless visage leaves him with a genuinely inhuman appearance. One of my favorite moments in the film featuring Arnold might not be what you’d expect. It’s the scene where he’s driving the police car through the parking garage, scanning the environment for his prey. The lightning coupled with the music (by Brad Fiedel) just gives the Terminator this horrifying presence. I found that scene to ooze “unstoppable killing machine” more-so than any of the action sequences (yes, even the ones where he’s unstoppably killing people).

Michael Biehn plays a great hero in Kyle Reese. His career never really skyrocketed after this film like everyone thought it would, though he has enjoyed some moderate successes (Tombstone, the Rock). His speech when he first encounters Sarah is gold. “It cannot be bargained with, it cannot be reasoned with! It doesn’t feel pity, or remorse or fear! And it absolutely will not stop until you are DEAD!” Holy shit!

Linda Hamilton is quite good as Sarah Conner, though in honesty, she doesn’t really stand out very much in this film. She gives a much more impressive performance in the sequel, though. There’s also the introduction of that jackass Dr. Silberman, who’ll actually manage to land an appearance in every film in the franchise and even the theme park ride in Orlando Studios. Also, look for appearances from Bill Paxton and Lance Henrickson. Though this bit of trivia is most-likely common knowledge by now, Henrickson was originally cast to play the part of the Terminator until the last minute where he was replaced by Arnold and given a smaller role as a cop.

And who could forget all the one-liners and catchphrases from this movie that will litter pop culture until doomsday? “Come with me if you want to live”, “I’ll be back” and “You’re terminated, f**ker!” are probably the stand-out three, though there are tons of memorable quotes delivered in virtually every scene of this film.

I suppose if I have to harp on one thing about this movie it would have to be the special effects. They are dated, I must admit, and not terribly good even by 1984’s standards. The clunky hunter-killer aircrafts from the 2029 future vision look particularly unconvincing, but nothing is more glaringly fake than the stop-motion endoskeleton. As much as I love stop-motion, even *I* can admit that it removes one from the experience. Thankfully, those moments of dated special effects are few and far-between, and for the most part, the effects in this film are quite good. The endoskeleton puppet used during the climax is especially menacing.

The Terminator isn’t just a good movie, it’s a really good movie. Though it’s like choosing between my children, a part of me has to say that it is my favorite film in the trilogy. If by some terrible miracle you haven’t seen the film yet, make it your first priority.