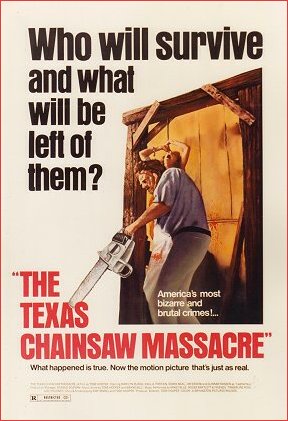 Here is one of the most influential and startlingly realistic horror movies of all time. The original Texas Chainsaw Massacre, ignoring all sequels and remakes, is a masterpiece of dark cinema, spiraling the audience into a world of torture and mayhem where you truly feel helpless and alone.

Sally Hardesty and her friends are traveling across Texas, looking for Sally’s old homestead. They come across a dilapidated old home and enter, hoping to use the resident’s telephone. One by one, each teenager is struck down by a freak wearing a mask of human skin over his face. Eventually, only Sally is left and she finds herself trapped by the Sawyer Family, who plan to put her on the menu.

Recent horror films like Hostel and House of 1,000 Corpses have been flooding the market with scary movies that deliver their thrills through brutal torture. However, the Texas Chainsaw Massacre was doing it thirty years ago and fell under some serious criticism for its intensely violent nature and darkly realistic look at a family of serial killers. Future installments of the franchise turned the Texas Chainsaw Massacre into a horror comedy and self-parody, eventually ending with the god-awful “Texas Chainsaw Massacre: the Next Generation”. But you won’t find any of that here in the original.

The origin of the Family is never made clear, only that they’re crazy and they want to kill everyone. The chase scene where Leatherface races after Sally with his chainsaw from the house to the gas station is absolutely heart-pounding. The opening narration of the film (done by John Larriquet, of all people) makes the fate of the teenagers quite clear, though leaves Sally’s end a little blurry. You’re never quite sure if she’s going to make it or not.

The infamous “dinner” sequence truly is as bizarre as people describe it, but then, serial killers are supposed to be sick and demented. No sense in sugar-coating everything for the audience. The insane ramblings of the Family members is unnerving and the bit where Grandpa sucks the blood out of Sally’s finger is stomach-churning without the use of gratuitous gore. As a matter of fact, the Texas Chainsaw Massacre honestly isn’t very gory at all. A few of the deaths at the hands of Leatherface’s saw (such as Franklin’s) are bloody, but the blood is obscured by darkness. The Texas Chainsaw Massacre is capable of delivering scares on a more psychological level and doesn’t rely solely on buckets of blood and body parts as a crutch.

The atmosphere of the movie is enhanced by the extremely grainy and sun-saturated picture. You almost feel like you’re watching documentary footage at times, adding to the film’s approach at realism. Although the film often describes itself as “based on a true story”, “inspired by a true story” would be a bit more accurate. The character of Leatherface is loosely based on the killer Ed Gein, who would kill women and wear their skin. Gein only killed 2 women, though, with the rest of the bodies found in his home having been exhumed from graveyards. Gein made furniture and decorations from the corpses, a concept which makes its way into the Texas Chainsaw Massacre as well. There’s also a bit in the beginning about grave-robbing and vandalism.

The original Texas Chainsaw Massacre won’t be for everyone. It’s very dark and very disturbing. Many go so far as to call it “sick”, extending that description on to the people who enjoy the movie, as well. The movie has serious guts and is masterfully filmed.