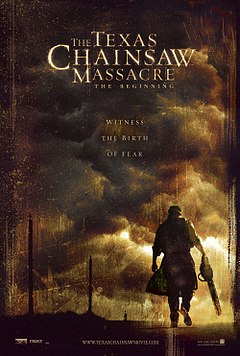 Shedding light on the birth of Thomas Hewitt (AKA Leatherface) and how the entire Hewitt Family turned to murder and cannibalism, “the Beginning” feels a bit like a retread of every Texas Chainsaw Massacre movie ever made, but then, this is a slasher film. And that’s just what slasher films do.

With the closing of their slaughterhouse, a small rural Texas town slowly withers up and dies, leaving only a single family behind to suffer. “Sherrif” Hoyt makes it his goal to keep his family from starving as well as getting even with the human race. At the same time, four groovy teenagers are passing through on their way to California. After a car accident, they have a run-in with Hoyt, who quickly (and painfully) forces them back to the Hewitt household for a night of torture, cannibalism and roaring chainsaws.

Being a prequel, you know right off the bat that these kids aren’t going to make it. So as you watch them fight for their lives, the knowledge that they’re just gonna get whacked takes the edge off ever so slightly. However, it also adds to the darkness of the film, as you know that no matter how hard these kids struggle and suffer, they’re just going to wind-up on the menu.

Leatherface takes a background seat in this movie, as the script takes a heavy focus on R. Lee Ermy’s character: Hoyt. Hoyt is a real raging jackass, and watching him torture these kids is the most entertaining part of the movie. You really love to hate this guy, as you do with every role Ermy has ever played. While Leatherface isn’t nearly as prominent a character as Hoyt, you do learn several parts of his “tragic” origin. I especially liked his birth sequence at the very beginning. There are other offerings, like a few tidbits here and there in regards to his miserable childhood or the closure of the slaughterhouse driving him over the edge, but probably the best origin sequence for Leatherface is the part where he makes his very first mask. Nicely done.

And for those of you who complained about its absence in the remake, yes, there *is* a dinner scene in this movie. While it isn’t as intense as the dinner scene in the original film, it is a nice gesture. There are a few other bits that are taken directly from the original film which long-time fans will notice, but I won’t ruin those for you. One thing I really liked about this movie, though, was that it didn’t down-play the cannibalism like the remake (and even the original) did. You know right from the beginning that these psychos eat people. There’s also an explanation as to why they eat human flesh and like it, which I found rather suitable. At any rate, it’s a far cry better than the explanation for the Family’s craziness received in “The Texas Chainsaw Massacre: the Next Generation”. But then, taking a bowling ball-supposatory would be a far cry better than sitting through that movie a second time.

The Texas Chainsaw Massacre: the Beginning is one of the better installments in the franchise, even if it is a new continuity. And, while it does retread a lot of ground from earlier films, it has enough new material to keep fans entertained. It’s also a much better film than the remake and is actually a better *remake* than the remake.