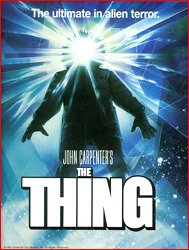 John Carpenter’s remake of “the Thing from Another World” is a serious departure from the original. While the 1951 film managed its scares by showing the audience the Thing as little as possible, this 1982 version does quite the opposite. The Thing is shown repeatedly in all its hideus glory. John Carpenter’s the Thing is a real special effects treat which continues to withstand the test of time.

At an Antarctic military base, a team of researchers are startled by a small team of Norwegeans invading their base, apparently trying to kill a stray dog. The Norwegeans are killed in the confusion and the Americans adopt the dog. MacReady (Kurt Russell) and a few others head to the Norwegean base for answers and discover that they had unearthed an ancient flying saucer…and something else. Shortly thereafter, they find out that the dog is actually the Thing from within the spacecraft and it happens to have the ability to mimic other living beings. The base is soon gripped with paranoia as the researchers become deathly uncertain as to who is still human and who has become the Thing.

The Thing is memorable for its crazy, over-the-top, grotesque special effects…and lots of em! John Carpenter isn’t shy about showing you what this creature is capable of looking like and you see plenty of it. The Thing has the power of metamorphosis on its side, so it rarely looks exactly the same from one scene to another. The Thing’s appearance is constantly fluctuating and transforming, a real accomplishment considering this was a decade before they’d invented CG effects to simplify the process. No sir, this is 100% *traditional* special effects and a real testament to their quality.

The movie is a real gore fest, as the Thing constantly mutilates itself (and others) every time it tries to transform. As a result, you’re going to see plenty of guts. When I was a kid I always had a hard time making it through the sequence where the Thing assimilates the sled dogs, as watching dogs getting killed has always been my one real cinematic weakness. There are numerous classic scenes in this movie, probably the best of which is the defibulator scene featuring Doc. Brilliantly disgusting from start to finish; from the point when Doc gets his arms chewed off to the severed head sprouting legs and trying to scurry away. It’s absolutely insane.

But Carpenter doesn’t rely solely on gore and outrageous special effects to scare the audience. One of the best moments in the film manages to build tension psychologically. MacReady has to administer a test to all the researchers (including a royally pissed-off Kieth David) one by one. You *know* one of them is the Thing in disguise and its real torture waiting to find out. Of course, once you do, the Thing goes bat-s*** crazy and starts biting off heads.

John Carpenter has made a plethora of fantastic films in his career, and the Thing typically ranks in the top 5. A great special effects film with lots of tension and gore.