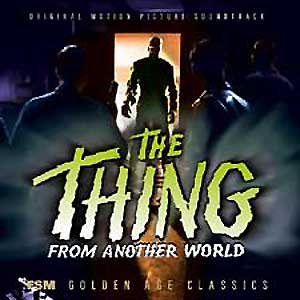 Despite being 55 years old, “the Thing from Another World” is one of those horror films which hardly ever seems to age at all. Taking an incredibly minimalist approach to horror, relying more on tension-building and generating mayhem, “the Thing” is acted and directed so superbly even today’s audience of brain-dead explosion-junkies can get into it.

Up in the North Pole, a US military research team unearth what they at first think to be a Russian spy-plane buried in the ice only to discover that it is, in reality, a flying saucer. Captain Patrick Hendry and his men unintentionally destroy the ship while trying to dredge it from the ice, but manage to remove its alien pilot, frozen in a block of ice, and take it back to base. The Thing quickly thaws itself out and begins terrorizing the men on base. A kind of super-intelligent plant lifeform, the Thing feeds on human blood for nourishment. Captain Hendry wants to destroy the Thing before it gets any more of his men, however, their lead scientist, Dr. Carrington, wants no harm to come to the beast for the purposes of science. While the scientific and military communities within the base argue over the fate of the creature, the Thing begins to feast.

Most people are more familiar with John Carpenter’s Remake, titled only “The Thing”, and when you compare the two versions you’ll find them to be immensely different. While Carpenter’s version was a smorgasbord of special effects, the 1951 original hardly allows you to see the monster at all. The bulk of the movie revolves around the research team trying to deduce ways to thwart the Thing as it picks them off one at a time. You don’t get to see the Thing-itself until the very end of the film, which regretfully, will leave you a bit disappointed. The Thing is a rather cheesy looking generic movie monster and was much more effective when it was confined to the shadows.

There’s something about the direction in this movie which makes it incredibly engaging. It’s very hectic with a rapid pace and lots of running around. The movie rarely slows down for an instant. While several actors take center stage, the movie tries not to focus solely on them as that would make it feel too much like a “movie” and remove one from the realism it’s trying to synthesize. All the characters, be they background soldiers or scientists, talk. To each other, to the main characters; they all get to chime in like they’re just as important. It almost feels like a real military operation and less like a Hollywood fantasy where the only people that matter are the leads. I suppose you have to see the film to understand what I’m saying.

Despite the ending being a let down due to the poor monster costume, the Thing does get some of the best moments in the film. Possibly the best sequence has the soldiers trap it in a dark room where they set it on fire. As the Thing bursts into flame (along with the room), the soldiers keep pouring buckets of kerosene on it. The Thing then runs around in flames, attacking the soldiers and eventually smashes through a window and into the snow. It’s incredibly well done and probably my favorite part of the movie.

While I *do* prefer the John Carpenter remake, the original Thing from Another World is still a marvelous horror film in its own right. It’s a real shame that monster suit at the end was so bad or it might have scored close to an A. However, considering the poor ending, I have to give it a B.