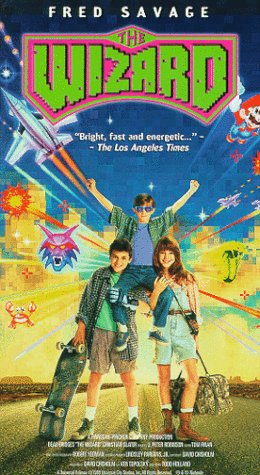 The Wizard, made in 1989, was a movie that tried to realize every kid of the era’s wet dream: traveling the open road, free from your parents, doing nothing but playing video games and earning cash. This movie is remembered best for its numerous video game references and blatant product placement and commercialism, but in all honesty, video games only factor into a portion of the actual plot.

Jimmy Woods (Luke Edwards) is a little boy with a strange fixation on “California”. He continuously runs away and gradually withdraws deeper and deeper into himself. Jimmy’s parents want to have him institutionalized, but Jimmy’s older brother, Corey (Fred Savage), won’t stand for it. Corey and Jimmy run away and head for California. Corey’s older brother, Nick (Christian Slater), and their father (Beau Bridges), chase after them across country, but have to contend with a bounty hunter who specializes in catching runaway children. While on the road, Jimmy and Corey meet up with Haley (Jenny Lewis), a streetwise young girl who helps them along their way. While traveling the open road, they discover that Jimmy is a video game prodigy (or as they call him, a “Wizard”) and decide to enter him into the Video Armageddon tournament in Los Angeles, where the prize is $50,000. But Jimmy has a lot of stiff competition, and getting there won’t be easy.

The video game angle is really just a backdrop for all the personal drama and family troubles, giving the impression that this is more than just a Nintendo commercial, as most people think of it. The talent assembled for the flick is really pretty good, to be honest. He may get a lot of jokes hurled his way these days, but in all sincerity, Fred Savage was a genuinely *good* child actor. Christian Slater does his usual “Jack Nicholson-lite” while Beau Bridges plays the determined and caring father nicely. It isn’t until the second half, really, that things start becoming heavily focused on spotlighting video games.

And, of course, that’s the real draw of this movie; the video game nostalgia. There’s Double Dragon, Ninja GaiDAN!!, Castlevania 2: Simon’s Quest, Super Mario Bros 2 and plenty more. Also, there’s the one game people remember most from this movie, the world premiere of Super Mario Bros 3. The Super Mario Bros 3 sequence at the end is a little irksome, mostly because they keep getting several facts wrong (this coming from a guy whose played the game about a million times), like calling World 1 Level 3 “World 2”, or Jimmy just somehow knowing exactly where the warp whistle in the fortress was (the only way people found THAT out was by reading Nintendo Power). And speaking of Nintendo Power, there are lots of references to it and the Nintendo Tips hotline.

The Wizard is a good kid’s movie but with limited appeal. Even with the recent DVD release it still falls below the radar of most sane human beings, only being remembered fondly by the gamer crowd. Still, if you’re a video gamer who was around during the reign of the NES and the existence of actual arcades which didn’t cater solely to the DDR crowd, then you’ll get a kick out of this movie. And even if you weren’t around at the time, if you like retro gaming then you’ll enjoy this.

The Wizard gets a B-. The story is pretty good for a kid’s take on “Rain Man”. The video game references are a great bonus.