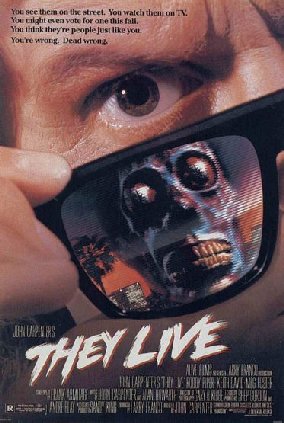 One of John Carpenter’s cheesier films, yet beloved for that very cheesiness, They Live is one of those good-bad movies. The story is strong, and so are the characters, but everything has this campy tongue-in-cheek atmosphere to it that you have trouble taking anything seriously.

Nada (Rowdy Roddy Piper), a drifter, drifts into California, looking for work. Quite by accident, he happens across a pair of sunglasses which allow him to see the “real” world. And boy, the real world isn’t very pretty. It would seem that some time ago, aliens took over our planet and nobody noticed. They use transmitters to hypnotize humanity into thinking everything’s just jim-dandy, when in reality, they are controlling our militaries, our upperclass and even putting subliminal messages (“Marry and reproduce”) in all our advertisements. Nada can’t save the world all on his own, so he enlists the reluctant aid of his friend, Frank (Kieth David). Together, they join a resistance force to try and wake humanity up to what’s really going on around them.

They Live is self-aware that it’s a B Movie, and yet this self-awareness raises it up slightly above the levels of your typical B Movie. Roddy Piper’s character of Nada is goofy but in an endearing sort of way. I mean, who can forget that line “I’m here to kick ass and chew bubblegum…and I’m all out of bubblegum”? It’s stupid yet unforgettable all at the same time. The special effects are…”humorous”, with the space zombies having some pretty sorry make-up and the flying saucers looking like something out of the 50’s. They even recycle the PKE Meter from Ghostbusters as a communications device. Still, these lackluster effects just add to the charm of the film.

There’s also the thinly veiled political commentary about the authorities keeping us in line through subliminal messages and control of the upperclass. I find that the movie is more entertaining if you don’t try to look at it as real-world commentary, but that’s just my layman’s viewpoint.

The real attraction to the film, and one of the more memorable moments, is the street brawl between Roddy Piper and Kieth David. It’s one of the more famous cinema fights, even being immortalized on South Park (“Cripple Fight”). What makes it so cool is just how…mundane it really is. No over-the-top kung fu moves or fireballs; just two guys beating the mortal Hell out of eachother. And it goes on for what feels like forever. The audience actually feels exhausted once this thing ends. Carpenter interjects moments of believable humor into the fight, such as Kieth David repeatedly kneeing Piper square in the balls, or trying to break a beer bottle open and having the entire thing shatter completely in his hand. Its just down-right entertaining.

I wouldn’t rank They Live in my top 5 favorite John Carpenter films, but it certainly makes the top 10. The campy humor and just overall “John Carpenter”-ness really moves the film and makes it so fun to watch.