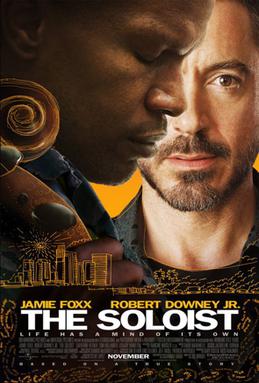 The Soloist is earning is getting great reviews and you can add mine to that. The film is based on a true story. It centers around the friendship developed between LA Times journalist Steve Lopez (Robert Downey Jr.) and a musically gifted but mentally ill Nathaniel Ayers (Jamie Foxx).

Nathaniel Ayers once studied at Julliard but due to a mental breakdown cannot cope with the strict code that society enforces and so ends up living in the streets, which is where Lopez finds him and befriends him. Being a journalist, Lopez of course started writing human-interest stories about Ayers but also starts on a quest to save Ayers. As time goes by Lopez realizes that his friendship with Ayers is the one that’s opening his eyes and making him see the richness of life. A movie about life and friendship that tackles the hard issues of homelessness and mental illness, the Soloist may lack the fast-pace of action flicks and will not awe you with effects but it is thoughtful and moving.

As for the acting, Robert Downey Jr was able to perfectly capture the character showing us the depth of emotions of the deeply troubled journalist. Jamie Foxx was equally perfect giving such a great performance that watching it you’ll forget that it is just acting. His portrayal of Ayers could just break your heart. Extra props to Jamie Foxx as well for his patience in learning to play the violin because it sure did pay off, even classical music enthusiasts agree that he was very convincing when he played the violin and the cello.

The movie is a must-see if you wish to see a quality film that is more than just about effects. This one you must see for the story and superb acting.