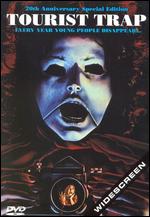 1980 is when the Slasher subgenre really began to hit off, which is why the Slasher-esque horror films of the late 70’s intrigue me so much. Since they predate the standard Slasher conventions established by films like “Friday the 13th”, but still retain familiar elements of the subgenre, they’re much less predictable or clichéd and typically have a few ounces more story to them than most Slasher flicks from the 80’s. “Tourist Trap” is one of those late 70’s Slasher flicks I enjoy so much. It keeps from falling into the by-the-numbers rut of its successors, but still features enough aspects of that horror subgenre I love so much.

While traveling along the back roads of Midwestern America, a group of teenagers stop by a dilapidated rest stop and wax museum located far off the beaten track when their car breaks down (you can tell where this is going). The museum is run by the friendly salt-of-the-Earth Mr. Slausen (Chuck Conners), who takes a liking to the group fairly quickly. He offers to help them fix their car and get going, but only on the condition that they stay away from the creepy mansion across the way, where Slausen’s crazy brother Davy, the creator of the numerous wax mannequins, supposedly dwells. Well, kids are stupid and they decide to investigate the mansion anyway. They then find themselves the prey of a creepy man in a wax mask with telekinetic powers and the ability to bring his wax mannequins to life.

“Tourist Trap” is a much more surreal experience than I was expecting, and all the better for it. I was pretty much anticipating a movie about killer wax dummies stalking stupid teenagers, but to my surprise, the wax mannequins actually play a rather small role. The spotlight is cast firmly on Mr. Slausen, Davy and the one good egg of the teenage group, Molly (Jocelyn Jones). The Slasher in question, Davy, defies the archetype of most Slashers and has a lot of personality, talking constantly and divulging information about his relationship with his goody-two-shoes brother, Slausen. While I love the Jason Voorheeses and the Michael Myerses of the world, I sometimes prefer my Slashers to have a little more going on for them than the “strong silent type”.

The movie quickly turns into a bit of a psychological horror show after the plot twist is made perfectly clear. I’d hate to ruin it for any of you, so, uh, stop reading if you don’t want to know.

Anyhow, you find out that Slausen and Davy are the same guy, but with split personalities. It’s actually fairly well hidden through most of the movie and caught me slightly off guard, I will admit. I was a bit disappointed that the wax mannequins didn’t get much to do, as I felt they were the creepiest aspect of the film. Still, the ending is a major head trip, as you find out that all of Molly’s friends are really wax mannequins that Slausen brought to life with his mental powers. It leaves you with the nagging question of whether the teenagers were mannequins through the whole movie or if they were just turned into them halfway through. Personally, I like flicks that leave me with a few puzzling questions at the end.

The movie reminded me a lot of the ill-conceived remake of “House of Wax” made in 2005, and it’s pretty obvious that that film drew more inspiration from “Tourist Trap” than the flick it was supposed to be remaking. So if any of you (likely, most of you) were disappointed with the aforementioned “House of Wax” remake, then I’d recommend you check this film out and see a similar-but-better version of that story.