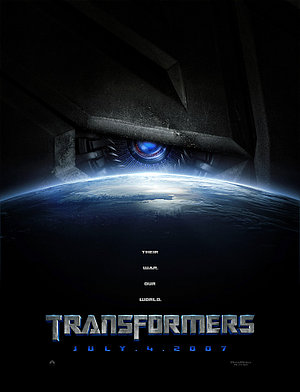 I’m going to level with you people. I am a hardcore Transformers nerd. I post on multiple Transformers messageboards, I collect the toys, I’ve seen all the cartoons, I even put half a decade’s worth of Japanese language study toward translating the terrible Japanese manga for TFArchive.com. Some of you may not have even known that a live action Transformers movie was in production until the trailers showed up last summer, but I’ve been following the film’s production like a hawk for several years now, ever since it was merely a gleam in the internet rumor bin’s eye. And like all obsessive nerds with nothing better to do than post on the internet, I had my doubts from the beginning. The movie was being produced by the guy who gave us such swell adaptations as “Double Dragon” and “League of Extraordinary Gentlemen”, it had a script written by the guy who penned such classics as “Catwoman” and “The Core”, and it was being directed by the man who gave us such cinematic masterpieces as “Pearl Harbor” and “The Island”. I was having some serious doubts.

And like most overreacting internet geeks, I was proven absolutely, inarguably, completely wrong. This movie will blow your freakin MIND!

On the planet Cybertron, two factions of super robot lifeforms, the heroic Autobots and the evil Decepticons, wage war for planetary supremacy. The Allspark, a device which can create new Transformer life, was launched into space thousands of years ago where it landed on planet Earth. Flash-forward to the present, a teenager named Sam Witwicky (Shia LaBeouf) has just gotten his first car, a rusty 1970’s Camaro. As he quickly finds out, his car is in reality an Autobot named Bumblebee. Sam and his not-yet-girlfriend Mikaela (Megan Fox) are quickly caught up in the Autobot/Decepticon war which has finally reached Earth. The Decepticons intend not only to regain the Allspark, but to free their leader, Megatron (Hugo Weaving), from his icy tomb. Standing in their way are the Autobots, lead by Optimus Prime (Peter Cullen), and the United States military, who want all robots gone, regardless of faction.

I suppose the first thing most undatable Transformer nerds are going to scream when they see this movie is “The robots don’t look like they did in the 80’s! NOOOOOOO!!!” While I had my doubts about the film early on, the one thing I always liked was the design asthetic for the Transformers. 1984 was a long time ago, people. The Transformers has always been a franchise of change and evolution, with different gimmicks and designs being implemented regularly since the 80’s (remember the Pretenders?). The whining over change which erupted from the Transformers online fandom is nothing entirely new. Back in 1998 there were Transformers fans who were absolutely certain that Beast Wars would harken the end of the franchise solely because it was different and the robots “looked funny”. If there’s one thing that has remained certain about Transformers, it’s that change revitalizes the franchise, keeping it fresh amidst the competitive world of children’s toylines. But trying to reason with some of these “fans” is pretty much a lost cause, as they’re likely locked away in their mother’s basement, watching tapes of the Generation 1 cartoon with a 1986 calander on the wall, refusing to accept the fact that life moves on and the 80’s are over. Such a pity.

But raging rants, aside, the wacked-out jagged metal design for the Transformers with their six-jillion moving parts is a sight to behold. Visually, this is like nothing you or anyone else has ever seen before. Director Michael Bay and effects studio Industrial Light and Magic have tread new ground and completely blown away the standard of visual achievement. You’ll have to pick your jaw up off the floor with a snow shovel once the credits role. And I’m not just talking about a few momentary scenes of giant robot action, oh no sirree. I’m talking hours of it. This movie was often advertised as “a story of a boy and his car”, leading many to believe that the presence of the actual robots would be heavily downplayed. That couldn’t be further from the truth. While that concept remains very strong throughout the course of the film, the audience isn’t spared a moment of the Autobot/Decepticon war, as it wages from highways to cities, with so much collateral damage you’re tempted to duck and cover for your own protection. This film is a visual masterpiece and no amount of hype can prepare you for how absolutely gorgeous and lifelike the Transformers are.

But enough about the effects, what about everything else?

Well, the cast is certainly stronger than Cybertonium. Shia LaBeouf has been having a serious year, what with this being his third film to hit theaters (check my reviews for “Disturbia” and “Surf’s Up” for his others). While some are getting a little sick of him, feeling like Hollywood is trying to forcefeed the public this new “superstar” ala Leonardo DiCaprio, I honestly can’t say anything negative about his performance in this film. He is hilarious as Sam (I’ll get to this film’s remarkable humor content in a moment), with his awkward sort nervous comedy performance just nailing the role right in the eye. Megan Fox also plays a strong female co-lead, delivering a performance that proves she’s more than just a pretty face. There are several other supporting human characters I haven’t even mentioned yet (there’s a lot going on at once in this movie). Jon Voight plays the grizzled Defense Secretary Keller, John Turturo plays the weirdly comical Sector Seven Agent Simmons, Josh Duhamel and Tyrese Gibson play a pair of Army soldiers caught up in the middle of the action and the list goes on and on. All the characters have their own quirks which make them stand out amongst one-another and bring a delightful sense of life and energy to their scenes.

Now on to the Transformers. The Autobots get the bulk of the screentime, each with their own distinctive and fun personality. Peter Cullen, the original voice of Optimus Prime back in the 80’s, reprises the role and hasn’t lost one bit of his edge. For all you nostalgia-whores, you’ll be orgasming in your seat with every word he utters. Ratchet, Ironhide and Jazz all have their own unique voices that make them a joy to watch. These aren’t just giant robot monsters, each Autobot is their own memorable character…just like in the cartoon and comics. Alas, the Decepticons fair rather poorly in the characterization department, with many not even getting to speak. I have a feeling they’ll be getting their due in the sequel (particularly Starscream), but as this installment stands, only Megatron and Frenzy (who is like the robotic reincarnation of the Zuni fetish doll from “Trilogy of Terror”) really stand out, though Barricade gets a few good moments in.

The script for this movie is an absolute delight. I’ve never met the man, but I get the feeling that Michael Bay has a tremendous sense of humor. There are jokes-a-plenty throughout this movie, each one being so utterly hilarious you’re likely to spit your popcorn on the guy in front of you. A few of the gags tend to go on for a little too long (the “hide and seek” scene comes to mind), and I could have done without a few of the comic relief human characters, but those nitpicks aside this script is comedy gold. But please, don’t get the wrong impression, this is a funny movie but it’s not a comedy. The action starts and hardly ever stops and the final battle within the human city is so completely insane you just might faint.

Yes, I am gushing over this movie, but I believe it’s a very deserved reaction. I haven’t had a movie-going experience like this since my ninth birthday when I went to see Jurassic Park. This film is breathtaking, charming and a milestone in cinematic history; and that’s speaking not as a Transformers fan but as a movie fan in general. As a Transformers fan…it’s like nirvana.