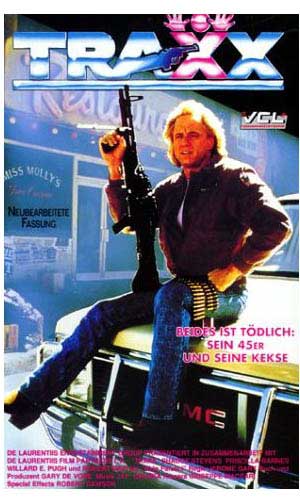 “Got a problem with some maniacs? Then you better call Traxx!”

This film is cinematic dysentery and I can’t explain what force possessed me to actually watch the damn thing. A friend of my brother’s has a very…”unique” VHS collection, and the description on the back of the box caught our interests. Now, under normal circumstances, I pen my own ridiculous plot summaries for the reviews I write, but not this time. I think, instead, I shall transcribe for you what is written on the back of this box. Keep in mind, it was meant to actually sell the movie to an unsuspecting public.

“Traxx (Shadoe Stevens) is a mercenary ex-cop who knows nothing about the law, but everything about justice. He’s tried El Salvador, Lebanon, Afghanistan, but something keeps drawing him home – the smell of fresh-baked cookies.

“Traxx dreams of starting his own cookie business, but faces two problems – he can’t raise the money, and he’s the world’s worst cookie-baker. To raise the cash, he returns to the one thing he does know about – gang-busting for fun and profit – taking on Capone-clone Aldo Palucci (Robert Davi), almost single-handedly demolishing an empire built on drug-running, murder and prostitution…

“The cookies, on the other hand, aren’t going so well.”

Can you really blame me for being intrigued? The plot description is not misleading in any way, shape or form; this movie is honestly about a loose-cannon ex-cop on the edge who cleans up the mean streets of Texas with his rugged lone-wolf attitude while baking cookies on the side.

Traxx tries to be an action-comedy along the lines of Beverly Hills Cop, but occasionally dips into the absurdity of Naked Gun. One of the factors which makes Traxx so difficult to endure is that director Jerome Grey honestly thought he had a hit with this gem. He tries to throw in moments of “kickass” one-liners or scenes he thought would go down in cinema history (like that unforgettable moment where Traxx jumps on a skateboard, latches onto the back of a cop car with his nightstick, then leaps from the skateboard at full-speed, crashing through the window of a pet shop and taking a group of gun-toting maniacs by surprise). I mean, Christ, they even get some 80’s band to perform a theme song for Traxx. It’s really bad.

Being a bottomless reservoir of cinematic creativity, Traxx hardly ever touches upon action movie clichés. I mean, certainly Traxx doesn’t befriend the first street savvy black man with an attitude he meets and the pair form a close bond which is only accentuated when said black guy is wounded by the enemy during the climax.

Said streetwise black man, Deeter, is played by Willard E. Pugh. You might remember him from Robocop 2, where he played the mayor who couldn’t stop screaming “Dat’s BULLSHIT!” over and over. They gradually build a bond of brotherly love over the course of two weeks. How do you know they care so deeply for one-another? Why, during a musical montage where they dance around like retards in front of a lake at sunset, of course!

The badguys of the film are almost as bad as the main heroes. The mob boss, Palucci, is played by the character actor Robert Davi. There’s a good chance you’ll recognize him from License to Kill, where he played Franz Sanchez. He’s been in tons of other movies, however, and has a pretty extensive filmography. As it stands, he’s the most professional/successful member of the entire cast (well, either him or Famous Amos, who makes a cameo at the end). The other badguys are the Guzik Bros., a trio of psychopaths who have a vendetta against little league baseball. In one of the film’s only highpoints, the Guziks kidnap a team of little leaguers and then tie them to the outside of their car as a shield as they pick their final battle with Traxx.

Normally, I’d warn you to avoid this movie, but why bother? It’s not on DVD, they never play it on TV, and most self-respecting video stores would have hurled this thing into the garbage years ago. Avoiding it is not going to be an issue.