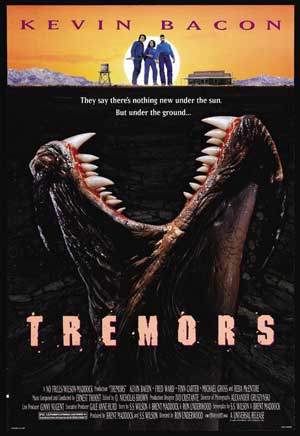 Back in the early 90’s, there wasn’t a person alive who hadn’t seen “Tremors”. It wasn’t because it was a great movie or got rave reviews, but because they showed it on TV every weekend. It seemed that whenever the Sci-Fi Channel or the USA Network had an empty block on their programming schedule they’d just fill it with “Tremors”. This practice continued on up until the early 2000s and was likely the reason why a film, which would under normal circumstances be regarded as a mediocre monster flick, received three sequels and a short-lived television series.

A small desert town in the American Southwest is under siege by giant man-eating prehistoric worms called graboids. With the town completely cut-off, it’s only a matter of time before the graboids pick off all the people and move on to a more populated area. Local handymen, Valentine (Kevin Bacon) and Earl (Fred Ward), and their gun-enthusiast buddy, Burt (Michael Gross), are left to rally the townsfolk into working together not only to survive, but to try and eliminate the graboid threat.

I may give it crap every now and then, but I do like the “Tremors” franchise. Alright, maybe I don’t like it so much after “Tremors II: Aftershocks”, but this first movie was pretty cool. “Tremors” is one of those movies that makes for perfect “background noise”. If there’s nothing all that good on TV you can just turn on “Tremors” and watch it out of the corner of your eye while you’re doing something else. Maybe that’s why they showed it so much back in the early 90’s?

A monster movie essentially hinges on the quality of its monsters, and the graboids definitely deliver. They’re giant worms with serrated beaks that travel underground at great speeds, spitting out multiple fanged snake-like tongues that latch onto their prey and drag them down to an early grave. Visually, the graboids rock. As for the name “graboids”, I’ve always hated it. When I was a kid I called the monsters “tremors” because that seemed like a perfectly suitable name and wasn’t half as stupid-sounding. But “graboids” is what they’re called and after four movies and a TV show there’s no changing that.

Director Ron Underwood crafts a number of memorable moments, usually full of half-comedy. The scene where the graboid invades Burt’s basement and he and his wife grab gun after gun after gun off their wall, pumping the worm full of lead, is hilarious in its absurdity. As far as genuinely frightening moments are concerned, the bit where the graboid pulls an entire minivan down into the ground, filling it with dirt and killing the couple inside managed to creep me out when I was little.

Kevin Bacon and Fred Ward may not be considered Hollywood Elite these days and yeah, they probably weren’t considered that back in 1990, but they’re still greater talent than films like this one usually garner. I’d like to think that their presences are what helped boost “Tremors” beyond your typical throw-away monster flick. The rest of the cast isn’t so hot. The character of Burt didn’t really come into his own until the sequel (he would inevitably become the “face” of the series, appearing in all its sequels and spin-offs) and so Michael Gross’ performance, while not necessarily bad, isn’t really at its best.

“Tremors” is good fun. There has to be a reason they played this movie every weekend for a decade, so you’re better off finding out for yourself.